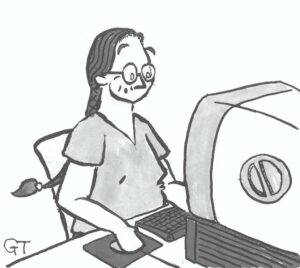 From October 26 to 29, ten unstoppable actors brought passion, force, and love to the stage of the Motyer-Fancy Theatre for their season opener, The Wolves by Sarah DeLappe.

Set in modern day America, The Wolves follows nine diverse teenagers as they navigate the world  and grow within it. Onstage, these young women didn’t shy away from any topic on the field — from scoring goals, to politics, birth control, Lord of the Rings, and each other, nothing was off the table between the girls.

Upon watching The Wolves, there was not a doubt in my mind that every single person involved in the creative process put their whole heart into the production. The show was directed and performed thoughtfully and beautifully by drama professor Valmai Goggin. As graceful as it was raw, every movement and word spoken had power and meaning behind it — an incredibly hard feat to accomplish. The production had a dedicated and professional team of practical technicians, led by incredible stage manager Jane Butler. The set and costumes, designed by Julia Kim,  transported the audience to an indoor soccer field that felt incredibly familiar. The alley-style stage gave the appearance of an indoor stadium, compounded by the theatre floor that was covered in AstroTurf. The jerseys and equipment appeared as though they had been used in many soccer games. This stunning attention to detail got the audience’s head in the game.

The luminous lighting, designed by drama professor Paul Del Motte, was so gorgeous that blinking even for a second felt like a crime. The sound design was equally as transformative for the play. Designed by music and drama student Rowan White, the sound within the theatre shocked and delighted the audiences and brought them even further into the world of the girls. The Wolves was one of the most immersive shows I have seen to date.

The performances of the actors on the stage were unforgettable. Each soccer player, who were identified by their jersey numbers rather than by name, brought an incredibly different voice to the stage. The Wolves marked a return to the Motyer-Fancy stage for Maika Branch, Faith Higgins, Amanda Godin and Alora Simon. Branch, who played #8, masterfully brought realistic innocence and youthful passion to the role, all while giving her depth and making her youthfulness non-stereotypical. #13, played by Faith Higgins, was the concrete definition of a firecracker. Higgins captivated the audience with her highly physical and unstoppably fun character. The amount of work she put in to create such an audience favourite was palpable. Amanda Godin took the audience by storm with her performance of #25, the no-nonsense captain of The Wolves. The bewilderment she gave to her audience was not missing in this show— the prowess of her speech as the team captain was unforgettable. The well-travelled and well-intentioned #46, played by Alora Simon, captured the audience’s heart with her relatable teenage awkwardness and surprising vigour. Simon’s delivery of the character fully and lovingly captured the journey of the new girl in town.

Sarah Tardif, Maya Noëlle, and Emma Poulsen made their Motyer-Fancy debuts as #00, #2, and #14, respectively. The anxious and insightful #00 was a show-stopper. For a character that is mute for most of the play, Tardif’s gorgeous performance was figuratively (and, in select moments, literally) ear-shattering. Noëlle’s heart-wrenchingly sweet performance of the naïve and thoughtful #2 was a beautiful homage to the real, adult struggles of teenage life. Noëlle’s representation of a kind yet wounded young girl was incredibly accurate, respectful and thoughtful. Finally, the wicked and wild #14 was beautifully played by Emma Poulsen. She gave #14 such a powerful mind and spiteful soul that the audience couldn’t help but love her sass and spunk.

This production of The Wolves is a true representation of hard work, love, and resilience. The production was originally set to premiere in the Winter 2022 semester, but was unfortunately postponed due to COVID-19. Two talented members of the original cast, Mt. A graduates Molly Dysart and Lily MacDonald, were cast to respectively play #7 and #11. This year, the Mt. A drama community gratefully welcomed two first-year performers in the places of Dysart and MacDonald: Phoebe Rex as #7 and Cate McNair as #11. Audiences were blown away by the powerful performances of these brand-new faces. The cool-but-cruel #7 brought the audience to laughter, tears, and in the end, to their feet in wild applause. Considering Rex’s wonderfully kind spirit offstage, it is a joy to watch her transform into the total opposite onstage. McNair’s observant and knowledgeable #11 schooled the audience, teaching them to love her eccentric flair and listen to the important and unfiltered opinions of a teenage girl. Her portrayal of the teenage genius was superbly done.

Joining the nine girls was the legendary talent and music professor, Jennie Del Motte. Del Motte’s performance as the Soccer Mom was a breathtaking representation of a mother’s love exceeding the boundary of blood relation. Though Del Motte’s character was onstage for just ten minutes, her presence lingered in the hearts and minds of audiences for much longer.  Del Motte poured every ounce of her heart onto the AstroTurf, making the souls on and off the stage weep, including myself.

This powerful production of The Wolves bicycle-kicked the Motyer-Fancy Theatre’s season into high gear, and left the audiences excited for what is to come. In her message to the audience in the show’s program, Goggin highlighted an important quote that every audience member left feeling immensely connected to: “We are always the same age inside.”