Alvvays return with an improved set of power pop 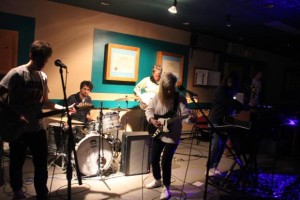 On the precipice of the Remembrance Day long weekend, SappyFest favourite Alvvays returned to town alongside PEI’s English Words and Moncton’s DJ Bones. Although the show netted a sizeable turnout for a mid-week event, and Alvvays finished the night off on a high note, the evening was far from perfect. The sets were grouped together awkwardly, resulting in general confusion around pacing. Additionally, the level of instrumentation, which makes live music a markedly different experience from home listening, was lacking.

The night began with a stumble as DJ Bones played to an empty dance floor. Noted for his popular Pond sets, their spiritedness and positive reception did not really transfer over to the Legion. The Moncton jockey’s signature blown-out indie classics, which feature throbbing beats neatly tucked beneath them, barely fit into the overall structure of the night, with overproduction being the only unifying trend. While the songs in his arsenal were definitely more conducive to a lively dance floor, they were stripped of nuance. Boiled down into vaguely recognizable club beats, they paled in comparison to their original versions. The result was a failed attempt by Bones to move the noticeably still-indie community to the dance floor.

PEI’s English Words did little to move the night out of the plastic, pre-packaged mould it was entrapped in. The five-piece was surrounded by a massive amount of gear that served as the basis for the electronic pop tunes they doled out. Matching their name, a notable Brit-rock influence ran through all their music with a keyboard and the occasional appearance of a sax to give it a bit of a flavour. However, their lack of a drummer and the centring of their sound around drum machine-produced music resulted in a staleness to the excitement they were trying to create. All the personality that underscored their music became an afterthought, and the lack of life in its core made for a forgettable encounter.

Alvvays (pronounced ‘always’) managed to finally break through the stagnation that enveloped the rest of the night, but only after spending the opening of their set dwelling in it. Their jingling pop was made trance-like with a smooth keyboard as its base. It seemed very formulaic at the beginning of the set, as one song bled into the next, but as their set progressed, the music did as well. The songs picked up speed and gained the kind of life that makes lives music shine, leaving the mechanistic beginnings behind. The initially overbearing keyboard moved to a more tasteful backseat and let the instrumentation, which it had been covering up, shine through, making all the detail available while not startling the audience out of their Brit-pop-inspired trance.

Compared to their SappyFest performance three months ago, Alvvays has grown much more entertaining to watch live and are beginning to break out of the dream pop genre and develop a unique sound.

The Toronto band has their debut LP set to be released by Royal Mountain Records at some point early next year. Having already released the lead single for the album, it has shown nothing but promise so far. With production by Calgary musician Chad VanGaalen, another SappyFest mainstay,  it is definitely an album to keep an eye out for.