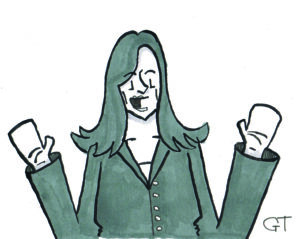 Amanda Barker is an actor, writer, and producer who has worked in television, theatre, radio, and podcasting.

Barker has been featured in series such as Murdoch Mysteries, American Gods, Ginny and Georgia and The Handmaid’s Tale. She has written plays such as Clotheswap, which debuted as part of the Toronto Fringe Festival working with the Textile Museum of Canada. Barker has performed with The Second City in Toronto, and in the musical Spank! on tour, from off-Broadway to the Just for Laughs festival. Her diverse profile of work makes her an incredibly knowledgeable resource for any student interested in theatre.

Barker graduated from Mt. A with a Bachelor of Arts in English and Theatre and was happy to reminisce about her time here. From stories of how the Palmer Hall (now Campbell Hall) ghost kept her up at night, to $2 drinks at Ducky’s, and the shows she did at the old Windsor Theatre, Barker was full of hilarious memories. She was even able to pull some old Palmer Hall stories out of faculty member and Tintamarre founder Alex Fancy. Barker’s presence on campus brought an environment of laughter and love of Mt. A wherever she went.

Amanda Barker has hustled and put in the work, and it has paid off. This is something she definitely communicated to students. Her “ins” to the industry were nowhere near conventional. Being the Pizza Pizza mascot and transitioning to the Toronto Blue Jays mascot was not in her plan. She did not know anyone upon arriving in Toronto and lived off of canned tomato soup for the first few years. However, Barker made it work through office jobs and connections in order to make her way into steady work.

Although Barker is not one to sugarcoat things, she is an excellent storyteller. In her talk at the Motyer-Fancy Theatre on March 15, she wove together an engaging story of her journey in acting. Barker debunked the myth of “making it,” and told students that it is much more accurate and more rewarding to look at acting opportunities as lateral connections instead.

Barker held many life lessons for students, and said that “when you put everything in, it can hurt you” when talking about the moment “[she] realized this industry could break [her] heart.” Amanda Barker’s talk spun life lessons, lighter moments, and profundity together. Her advice for comedy is “make it specific, and you’ll make it universal.”

Not every drama student will end up with a professional career acting, whether on stage or on screen. This is something that Barker knows well, and instead she wishes to support students any way she can. Amanda Barker is  generous, meeting students where they are and offering advice, support, resources, or just a chat. She is extremely knowledgeable and giving, and she is keen to work with students in a way that best serves them.

I immensely enjoyed my chats with her and thought she was able to give excellent guidance for the Toronto acting world. “Nice people that show up and do the work and are interesting and creative” will succeed, and that is something Barker exemplified in her time at Mt. A.