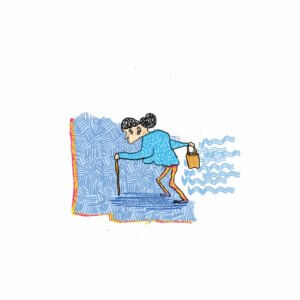 Ms. Fannon was on her way to Howe’s, Lincolnshire’s only grocer. She made the walk daily – out her front door, down Uplands, left on First, then straight to Howe’s, which sat right in the centre of town. Lincolnshire seemed quiet as she trotted along. Mr. Leemly, with whom she always spoke, was not out toiling away in his flower garden as he was wont to do. No gangs of children could be seen terrorizing seniors on their scooters (the children on scooters, not the seniors). On First, a few of the businesses near Bloomingdale’s were closed. How they are slothish, she thought. Lacking the capacity to complete a day’s work. Ms. Fannon could be a bit severe.

Just as she approached the front door of the grocery store, Howe himself burst out.

“Can’t serve ya now, miss,” he said as he fumbled his keys and locked the door. “Must get to the park.”

“The park?” she retorted, hurrying to catch up with him as he walked off. “Why do you go there?”

“There’s been a death. A murder, they’re saying. But you won’t believe what’s happened – Herr Hansel, he was dropped from a plane and found dead in a tree at Sweohal Park.”

“Nobody in town really knew him, or wanted him here. I mean, the man was a lunatic! So obsessed with the Germans he made us call him ‘Herr’? Please!”

“And they’re saying it was a military plane. I couldn’t believe that when I heard it. Sandra down at the airbase is gonna have some pickle to sort out tomorrow.”

By now, they’d taken a left from First onto Hartford, and were approaching Sweohal Park. A large crowd was gathered around an old tree, beside which lay the body, covered in a white sheet. Leaving Howe at the perimeter, Ms. Fannon bullied her way to the centre of the crowd.

Just then, Dr. Hiskez – Lincolnshire’s sole doctor, and police officer – stepped into the middle of the circle. The crowd’s mutterings ceased as he held up his hands.

“Our brief inquest,” he said, his voice loud despite its rasp, “has shown that Herr Hansel was dead before impact. We have no statement yet as to how the body arrived here. Please remove yourselves from the area.”

Ms. Fannon, putting on an air of coolness and indifference, turned to walk back to Howe’s. She was keen to get her groceries and get on with her day.

“Howe! Can you open your shop? I really can’t wait.”

“This? Strange as it is, I’m sure it’ll sort itself out. Not mine to worry about. Come! I really can’t wait.”