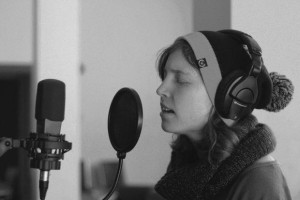 After countless hours of hard work and musical production, the 2014 Conduct Becoming album is finally here. The 14-track Emotions reflects a collaborative and creative experience with a finished product that Mount Allison musicians can call their own.

Featuring local students and groups such as Michael Duguay, Aislin MacDonald, Hay Henderson, and Max Grizzy and the Entertainment, the album compiles a diversity of sounds and stories that reflect the artists and showcase their creative abilities. From Becca Hyland’s alluring Maritime ballad “Near the Sea” to Sean Yerzy’s contagiously catchy “Falling Up,” the album’s variety of talents undoubtedly boasts something for everyone.

Many of the tracks feature accompaniment by several other musicians, embodying the cooperative spirit for which Conduct Becoming is known. By combining different sounds and adding new instruments, students are able to take their songs to places they might never have imagined.

Odum Abekah, the executive producer of Conduct Becoming 2014, said that the collaborative element of the project was one of the most important aspects for him. “When working with another musician, it is easy to be influenced by them and incorporate some of their habits into your own style,” he said. “It helps you to think about music in a different way, and makes you more willing to experiment.”

Since its inception in 2001, Conduct Becoming has honoured the memory of Jason Abraham by raising money for cancer research and providing an opportunity for students to come together to record and produce their original music. Every year, the organization releases an album and holds a concert at which many of the participants perform their songs for a live audience.

This year’s project was primarily recorded in Brunton Auditorium and Hammond Studio, formerly part of Bermuda House. Because the project deals directly with the recording process, students are offered a look into this aspect of musical production. “Each of the artists got to experience a typical recording process,” said Abekah. “They also learn about recording techniques for their specific instruments, and the importance of that in the final sound of their songs.”

Catherine Gosselin, whose original song “Ballad of a Sinner” appears on the album, shared a similar sentiment with regards to Conduct Becoming’s detailed and educational recording process. Gosselin explained that her piece changed as she recorded and collaborated with other musicians, eventually finding a balance between her original vision and new ideas. “My piece really changed throughout the writing process, usually because of my performers,” she said. “Listening to the final result now, it’s much different than what I heard in my mind while writing it.”

As a third-year student in Mount Allison’s Department of Music, she believes that Conduct Becoming is a valuable venue by which music students can pursue creative projects without the restrictions or requirements that their classes demand. “It’s been great to be able to write exactly what I wanted without being graded for it,” she explains. “I was allowed to write the words I needed to the music I felt best conveyed those emotions. It’s kind of a liberating feeling.”

Since he began working with Conduct Becoming in his first year in 2009, Abekah has taken up various roles and positions, and cites the organization as a cornerstone of his Mt. A experience. In addition to facilitating the development of his musical and recording skills, the connections and relationships he has made throughout the years has made a significant and lasting impact. “Conduct Becoming brought me out of my shell,” said Abekah. “It helped me to find out what my strengths were as a musician, and how to use them in a way that not only benefits me, but the people around me as well.”

Abekah intends to continue making and recording music with the help of the skills that he learned throughout his experiences at Mt. A. “Conduct Becoming has made me more confident about where I want to go, because I am so proud of where I’ve been.”

Along with Emotions, previous Conduct Becoming albums are available for streaming and purchase from their website at www.conductbecoming.ca, as well as from the university bookstore.