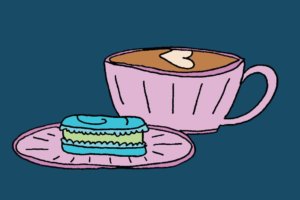 Sackville business owners start up new café as their next venture

For many weeks, Sackville’s inhabitants have wondered what would take over the space of the former Bridge Street Café which closed just months ago. Now when you step into the space, you are greeted with an entirely visually different interior to the old Bridge Street Café that we were familiar with. “It’s very modern and chic but still has a cozy and welcoming atmosphere,” said second-year student Elise Hansen.

Kwon and Song have started Aida’s Café as partners in business. The mother-son duo began this new venture with a bang, with the shop consistently filled throughout the first few days of business. “Song’s Chopsticks was doing really well, but we became tired of it because we were just working all the time,” said Kwon. “We wanted to bring something new to the town, a place with really good coffee. We worked a lot on picking good coffee beans and actually making the baked goods ourselves every day.”

Aida’s Café is hoping to serve breakfast in the near future but has started out with simplicity and quality. Baked goods and traditional Korean egg toast are on the menu, as well as a variety of unique hot and cold beverages. The real shining stars are the delicate and delectable macarons, a French confection that is sweet and light in texture. This meringue-based dessert is incredibly difficult to make, as one tiny mistake can ruin the balance and flavour. “I used to be a cook and now I’m working with coffee and brewing. I’ve never baked before and making macarons has been a challenge,” said Kwon.

As for beverages, Kwon has taken special care to make sure the coffee beans are perfect for the kinds of coffee he’s trying to make. With coffee beans from Halifax, you can enjoy espresso, lattes, cappuccinos and drip coffee from Aida’s.

“So far the business has been pretty successful. I think it will really pick up once we have breakfast,” said Kwon, only a few days after opening. “I think we’re just going to start slow, but have a really strong baseline of food and drink. That way, customers can come back and enjoy the same quality food every time!”

Kwon gave a few of his menu recommendations. “Some of my personal favourites are our lattes. Our espresso beans are really nice. They’re from Halifax and we get them fresh every week, so we use fresh beans every day,” he said. “Of course the macarons are good. A few of my favourite kinds are the cream cheese, milk and caramel,” he said.

Sackville’s local shops and cafés contribute to the small-town charm that we all know and love, and Aida’s is no exception. If you haven’t experienced it yet, make your way out to Bridge Street as soon as possible. Whether you want breakfast, a hip hang-out for studying or a great date location, Aida’s is the place for you!