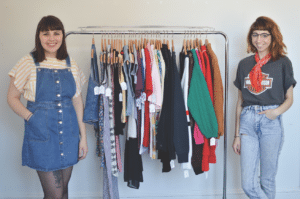 Described by shop-owner Anahid Chujunian as “a tiny safe space chock full of carefully selected new and used clothing and accessories,” Little Cat’s Bazaar has been filling the wardrobes of Sackvillians with stylish vintage and pre-worn threads for a few years now. But this summer, Little Cat’s is packing up shop and hitting the road. I sat down with Chujunian and her current business partner Katharyn Stevenson to hear more about what’s in store this summer for the homegrown business.

Rebecca Butler: What are your plans for the summer?

Anahid Chujunian: “I needed to find a way to keep Little Cat’s going without having a storefront, so I suggested to Katharyn that we try taking Little Cat’s to festivals and markets.”

Katharyn Stevenson: “After some planning we decided it was possible, so we made a schedule. But we’re kind of in an ongoing process of planning as we go.”

KS: “And we’re able to reconnect with people that used to live here in Sackville but have moved away. So it’s nice to have an excuse to travel and see your friends, and also be able to hang out at a musical festival and be in that atmosphere.”

RB: What’s your experience on the road been like so far?

KS: “We just started a couple weeks ago, and it’s going pretty great so far.”

AC: “So far we’ve been to Fredericton, where we went to Flourish Festival and had a pop-up shop at a store called Modern General. And then we went to Saint John, where we did Quality Block Festival, which was put on throughout the ECMAs.”

AC: “In Sackville, it really is a lot of the same people that shop at Little Cat’s, so it’s been really exciting for me to have a broader and new customer base.”

KS: “It’s really cool to see how many people are actually interested in seeing what the store does, but have never really gotten the chance to get to Sackville.”

AC: “Also, it’s much more exciting. We know what we need to do and what our job is, but we never really know what will happen until we’re all set up. It’s been going super well so far, so we’re in good spirits and we’re happy about how it’s going. I think it’s only going to get better as we work through everything.”

RB: Where do you see the shop a year from now? Five years from now?

AC: “The short answer: I have no idea. I want to open up a much larger storefront, where I can be open all year round. I’m still not sure what next year holds for me, or whether or not I’ll still be in Sackville. But I’m happy that I built Little Cat’s in Sackville because Sackville is a community that has allowed me to develop this shop through trial and error in a safe space. And I’ve learned so much. Where else could you open a small business, and learn so much with so much support? Sackville has very much been the best place for me to start.”

KS: “Wherever Anahid goes, I think the support of Sackville will follow her. So many good things start in Sackville because you have such a supportive base and such a strong community, and people will really rally around you if you want to make something happen for yourself. Whether I’m still involved a year, or however many years from now, I think all of us here in Sackville will be supportive of Little Cat’s wherever Anahid ends up.”

Their next adventure sees Chujunian and Stevenson travelling to Charlottetown for the P.E.I. Thriftspotting Pop-Up Flea Market on May 20. But you can catch Little Cat’s Bazaar this weekend in Sackville at a pop-up shop at Thunder & Lightning. For more information and for inquiries about shipping any items that may catch your eye online, check out Little Cat’s Bazaar on Instagram and Facebook at @littlecatsbazaar.