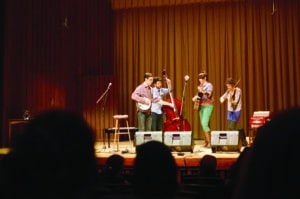 Stone has collaborated with a wide range of different musicians throughout his work on various albums and projects. His first album came out in 2013.

Stone introduced the project by sharing the inspiration behind his work. “I’ve been working with old field recordings in archives and trying to revive them. I’ve always seen field music as time capsules, but now I see them [as] heirloom seeds. They are these old things that have a life within them waiting to spring up,” Stone said. “That’s what this project is about: taking things and making them new again.”

The field music Stone referred to is largely inspired by the work of Alan Lomax, a folk music field collector during the mid- to late 1900s. “I like to go back to the roots [of a music piece], to learn something inside out. I love the act of discovery,” Stone said.

The re-creation of old songs requires a highly collaborative artistic process, in which Stone functions as the “primary curator.”

“I bring the majority of the songs, then everyone contributes. Often someone will bring in a song and have a vision for it, but then everyone [eventually] settles [on a final product],” he explained.

The group danced on the typically formal stage as they listened to one another play. They moved around one microphone, taking turns singing, at times drawing close to combine their voices. The band was clearly comfortable and enjoyed one another’s company, often laughing at and with each other while performing both with and without instrumental accompaniments.

“Every night the songs change. We play with our parts,” Stone said. “At first it is broad brush strokes, but then we try to find new things, changing texture and tambour. There is magic in spontaneity. It’s fun to have the listeners not know what is improvised and what is not. That’s the sweet spot.”

This sweet spot was clearly visible through the group’s interactions. An intimacy was apparent, especially when the four musicians drew together during musical interludes, facing each other and watching what the others were doing so that they would blend effectively. This intimacy extended to audience members, who got the sense they were peering through a window into a uniquely special jam session or kitchen party.

Music students Keelin Howe and Ellen Niles enjoyed both this atmosphere and the concert. “[It] was such a great opportunity to hear a genre of music not usually featured in Brunton,” Howe said. “As music students we get to go to so many amazing concerts, but they are not usually outside of the world of art music. It is so important for us to branch out.”

“It was a nice change of pace from what we usually see in the conservatory,” Niles agreed. “I think it is really important to bring in different acts [so that we can] see both the different forms that a musical career can take and … folk music itself on such a professional level.”

Niles particularly enjoyed the four-part harmonies that the group seemed to master so naturally.

The show ended with the band inviting the audience to sing along with them. “We cannot end a night of folk music without singing together!” Stone encouraged. The whole audience joined in to joyfully sing, “I Want to Hear Somebody Pray.”

A self-defined composer and instigator of thoughts about the meaning of music, Stone is a two-time Juno award winner with big things in the works. “There’s a new record about to come out, which I’m crazy excited about,” Stone said. “Big touring starts up in two weeks in the U.S. and Canada. Other than that, I’m recognizing the signs [of new inspiration] and am interested in experimental indie rock.”

This would be totally new for Stone, who, so far, has only worked with “the acoustic and the organic.” Stone expressed excitement for experimenting with new musical components. “I would love to play with synth.”

His new album, Jayme Stone’s Folklife, comes out in April.