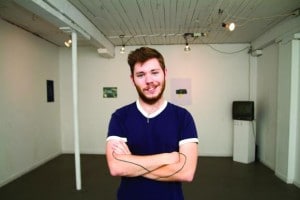 Exhibition plays with medium and message.

As Marshall McLuhan once famously said, “The medium is the message.” This sentiment is shared by fourth-year fine arts student Kyle Forbes, whose work with both prints and electronic media explores the distillation of complex meaning into a single, simple form.

Forbes’ exhibition, “I Don’t Even Know// Where to Begin,” was recently featured at START Gallery. Through a series of silkscreen prints that depict various scenes of nature and travel, Forbes conveys a sense of remoteness and isolation. Rather than working with a complex colour palette or abstract visuals, Forbes prefers to keep things simple by using accessible, geometric patterns and relatable images.

Forbes enjoys the solitude that comes with long hours in the print shop, and sees this as conducive to creative inspiration and activity. Some of his works, like Surrounded and House in the woods, were even inspired by summers spent in quiet contemplation at home or outside. “[I like to find] that weird line between feeling isolated and alone, but also using that time to be pensive,” said Forbes during an interview.

One of the pieces in the exhibition, entitled What can hurt you the most, was created using a combination of lithography and screen printing. Forbes discussed the organic process of making the piece and the nuances and imperfections that are a natural product of lithography.

“You come in with a certain amount of the image, and the stone brings the rest,” said Forbes, after describing the labour-intensive process that goes into each print. “I like working with that unpredictability.”

Forbes’s exhibition also included two electronic installments. The first, entitled AL1, was an audio piece that further contributed to the theme of solitude. The piece features audio recordings of background noise in places where Forbes is routinely alone, such as the library, the print shop, or his car.

“You don’t really notice that you’re by yourself until you listen, and you hear the absence of noise,” said Forbes. “In acknowledging the silence, you hear new things.”

The second electronic piece, entitled Can you hear me now?, consisted of a television screen depicting a single, blinking light. It flashed in Morse code, and Forbes included a guide for translating the message. It turns out, however, that his message was an illusion, as it translated to nonsensical Latin.

“It’s just meaningless text,” said Forbes, noting that this clever trick on his viewers also carried a deeper implication for art interpretation. “People are constantly trying to make sense of everything and find patterns in things,” said Forbes. “I really liked the idea of people trying to translate something that had no meaning. They thought it said something important, but it didn’t.”

Originally from Fredericton, Forbes is in his third year at Mount Allison and his fourth attending university. He initially dabbled in graphic design, but discovered a passion for printmaking and he stuck with it.

Rather than taking a planned or systematic approach to art, Forbes prefers to let ideas come impulsively and take form in a natural manner, which is reflected in the title of the exhibition. “It’s about accepting that I don’t have to have a beginning,” said Forbes. “[When I create art], I feel like I’m starting in the middle and working my way out. I don’t know what I’m going to make until I’ve made it.”