From Mt. A to ‘Miracle on Mercer Street’ 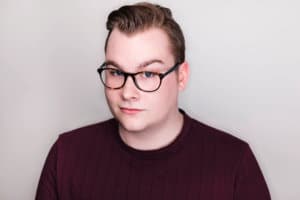 “It’s hard work and attitude that get you everything,” said Tom Hearn when asked about Mt. A’s most important teaching. He explained that success comes from “putting in that extra effort and going that extra mile.”

When I spoke with Hearn on the phone last week, I learned that these lessons have been the foundation for a successful career as a writer, performer and producer.

In his time at Mt. A, Hearn was a part of over forty productions.

Since moving to Toronto and graduating from the Second City conservatory, he has remained as busy as ever. A recipient of the Second City’s Tim Sims Encouragement Award, Hearn improvises with the Bad Dog Featured Players, performs award-winning sketch comedy with Erica Gellert and is part of the Sketchersons’ weekly Sunday Night Live.

Outside of his jobs as a performer and writer, Hearn has spearheaded the formation of Kinsey Fail, an LGBTQ improv troupe.

“The entire reason behind it is I just want to see more queer performers out onstage,” he said. In addition to a rotating cast of 12 to 15 improvisers, Kinsey Fail also runs “an LGBTQ safe space drop-in for people who want to try improv for the first time.”

“It’s the best queer performers in the city all performing together for what tends to be also an entirely queer audience,” Hearn said, and added, “It’s just letting people recognize that they can see themselves onstage and in turn the stage reflects the audience.”

In addition to his sketch and improv work, Hearn is currently in rehearsal for the Second City’s Miracle on Mercer Street.

“It’s about a 13-year-old girl who goes to visit a town called Hollydale where not everybody’s like her, not everybody celebrates Christmas,” Hearn said. “So she’s learning about all of the different types of holidays that happen at that time of year in a fun way with puppets and songs.”

Hearn believes that highlighting these differences as good is important, especially given the current political climate. He said, “I think it’s a good message right now for young people in the world that we live in to realize that not everybody has to be the same and that’s okay.”

He is also excited by the opportunity to work with the Second City, which will be his first time doing so in a professional capacity. He said, “It’s something that I’ve wanted to do for a very long time and it’s coming true.”

Despite how busy he is as an artist, Hearn wants current drama students “to know that it’s okay to take a break.”

“Nothing goes away,” he said. “If you take a break, it’s not like you’re going to come back and people aren’t going to remember who you are. It makes you a better performer when you take a step back and look at the world.” He also stressed the importance of learning through doing, something he learned in his time at Mt. A.

“It’s important to realize that it’s okay to make mistakes. You’re not going to figure it out in your first go,” Hearn said. “It’s realizing that everything is in motion constantly and just riding that wave is really important.”