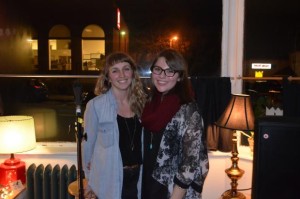 Halifax-based writer and educator Kaleigh Trace revels in promoting discussion about gender and sex. Last weekend, Trace brought these discussions to the Sackville community along with her newest book, Hot, Wet, and Shaking.

The event was organized by the newly reformed Women’s and Gender Studies Society and was hosted by Thunder & Lightning. It was part of a series of readings performed by the author along her tour that included stops ranging from the University of King’s College in Halifax, to New York City, to the University of Guelph.

As the crowd was settling in and enjoying refreshments, chatting with friends, and ordering drinks at the bar, Katharyn Stevenson, the president of the Women’s and Gender Studies Society, introduced both the topic of discussion for the night and the author herself. Once Stevenson took the microphone, the din died down and she broke into a reading of a formative work on sex, gender, and beauty: The Beauty Myth by Naomi Wolf.

Stevenson chose an excerpt from Wolf linking societal expectations of beauty with the way we think about sex.

“The reader understands that she will have to look like [a model] in order to feel like that,” she read.

Stevenson continued by relating a personal account of how the understanding of sexuality and romantic relationships can differ in specific situations. Stevenson drew her introduction to a close by saying, “It’s okay to have your own sex story.”

Then it was time for Trace to take up the microphone to deliver a reading that was at once serious, thought-provoking, and hysterical.

But before all of this could happen, Trace gave the audience a brief overview of her past experiences and discussed the themes of her book. Trace describes herself as disabled, queer, and a sex educator. Her book Hot, Wet, and Shaking, as described on the back cover, “discusses her sexual exploits, bodily negotiations and attempts at adulthood, sparing none of the details and assuming you are not polite company.”

Finally, Trace discussed the topic of figuring out whether one feels most comfortable in a plaid shirt matched with boots, or a skirt matched with anything pink, and the relationship between appearance and sexuality.

Trace spoke about each topic with humour and, more importantly, with a frank honesty that is frequently left out of normative discourses on sex and sexuality. Each of the stories at once demystified the topic at hand as well as encouraged the audience to accept that these topics are ones that everyone should feel comfortable discussing.

One of the evening’s most important excerpts came from Trace’s reading of “(Not) Moving Like a Dyke/(Always) Dressing Like a Femme.” As the story of how Trace had navigated the complex tangle of appearance and sexuality unfolded, she read, “Maybe queer could look my way too.

This summed up the message of the evening: sex and sexuality doesn’t have to look or feel a certain way, but every alternative narrative of sex should be welcomed and encouraged.