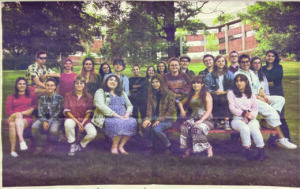 Former Arts and Culture Editor, Ben Maksym, reflect on their time at the Argosy

If you read The Argosy between 2018 and 2020, saw a Motyer-Fancy Theatre show from 2016 to 2020, or saw a student wearing an iconic red beanie with a bell on it, you had the pleasure of interacting with Ben Maksym. Maksym was the Arts and Culture Editor for The Argosy from 2018 until 2020. Originally from Grand Isle, Vermont, they have been based in Sackville since they began their schooling at Mt. A. After graduation, they pursued a career in video game design, and their games have been released on platforms such as itch.io and Steam. Game titles they have released include Polymute, Elephantasy and Kiss the Stars Goodbye.

Maksym became involved with The Argosy on a whim. They were considering pursuing editing after their graduation from Mt. A, so they applied for an editing position at The Argosy towards the end of 2017. During their time editing at the newspaper, they enjoyed doing page layouts, which were (and still are) arranged using Adobe InDesign. Creating digital layouts for the paper is a skill that has carried over into their career. It has helped improve their creative eye, allowing them to create stunning visuals in their games. They also mentioned the benefit of editing work for marketing and crafting pages on digital storefronts.

Maksym’s advice to aspiring editors is simple, but important: to listen to the words you write.

“My advice to any aspiring editors is to always think about how something sounds rather than just how it looks on the page. I find that people have more trouble noticing mistakes in their writing than they do mistakes when they’re speaking,” said Maksym. “Honestly, I think that’s good advice for anyone who has to write academically too!”

Maksym truly enjoyed their time at The Argosy. The part of the job that they miss most is the connections they made along that way. Because the staff changes each year as senior staff graduate, Maksym had a chance to network and establish lifelong friendships. Maksym says that they will always cherish weekly pitch meetings, as they gave them a chance to converse with their reporters and fellow editors. Something that continues to be vital to Maksym’s work ethic is communal respect and team-building.

“Be nice to the people you work with, especially your reporters and contributors. It’s the best way to find folks who actually enjoy writing for you, and to keep reporters or contributors who do good work,” said Maksym. “I really loved my reporters, and talking with them each week was always a highlight of those two years. Those connections were really what made the whole job worthwhile for me, and I really do miss them.”

Maksym recounted a fond memory of working at The Argosy: editing the 2019 Convocation issue with former humour editor Will Traves. This issue, full of hard work and dedication, ultimately won them the Crake Sawdon Award for Student Journalism.

“[During the 2019 Convocation], only one other editor (Will Traves) was around at that time of the year, so we had to go to the office and do all of the layouts for everything! I did [Arts and Culture] and News, and he did Humour, Opinions, and Creative. For reference, normally we’d have a whole team of editors doing layouts at the same time, and it would still take hours, so you can imagine how slow it was with just the two of us,” said Maksym. “At the end of it, I also did all of the compiling to send the paper off to be printed, which was surprisingly confusing. I hope that things have gotten a bit easier since then!”

To see the skills that Ben learned in action, you can check out their games (including Polymute, Elephantasy, and more) at linker-gamedev.squarespace.com.