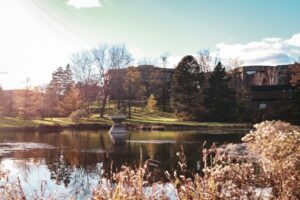 A look at some of Mt. A’s oldest buildings.

While studying ancient monuments, archaeologists often find that our ancestors built structures on top of older, existing structures. Under the soil, they find evidence of societies thousands of years older than what is on the surface. Although Mount Allison University is not thousands of years old, there is still plenty of history beneath what we see on our campus today.

When I first started at Mt. A in the fall of 2019, I quickly became very interested in the history of the buildings on campus. I find it incredibly cool that the same land the campus sits on today once had a very different look. Unfortunately, I cannot look at every building that was once on campus for this article, so I will showcase some of my personal favourites.

The Memorial Library was built in 1927 as a monument to the students who died in the first World War. The building sat where the Purdy-Crawford Centre for the Arts is today and was torn down in 2011. Because I lived in Sackville as a child, I still vaguely remember this building. There are also videos of it on YouTube! Once the Ralph Pickard Bell Library was built in 1970, the Memorial Library became a space to host the Windsor Theatre in its later years.

The Owens Art Gallery was built in 1895, and was the first university art gallery in Canada. It was originally associated with the Ladies’ College until the university established a fine arts program in 1936.

The President’s Cottage is the oldest building on campus today. It sits behind the Barclay building and across from Avard-Dixon. It once housed presidents of the university until 1957. In 1980, the University Club dining room was established on the main floor, and it remains in operation today.

Did you know that the Swan Pond is man-made? In 1901, construction of the pond began on the former site of the Ladies’ College. The pond was designed by Professor John Hammond of the Owens Art Gallery. It was once known as the Ladies’ College Park until the Ladies’ College shut down in 1935. Although there are currently no swans in the pond, I remember seeing at least two swans there each year when I was a child. The University stopped acquiring swans in 2015.

Sidney A. Windsor was the creator of the Windsor Foundation. Windsor attended Mt. A in the early 20th century and went on to make his fortune in the canning industry. Windsor Hall is named after him.

There are many more interesting facts about the history of buildings on campus. For example, did you know that they used to have farms on campus? These small farms were used to provide food for the dining hall! That might be a fun project to bring back for students staying on campus over the summer.

If you are interested in learning more about the history of Mt. A , there is a lot of information on the library website, and you can also visit the archive to find old photos and documents.

An inside look at audio journalism