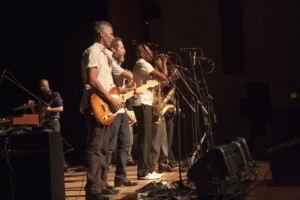 Last Tuesday, The Mellotones kicked off First Class Bash in lacklustre fashion. It was not the band’s fault, as they played a set of excellent covers ranging from Daft Punk to Bob Marley, but rather the environment in which they were situated.

Calling Convocation Hall a bad venue for a rock ‘n’ roll show is a tremendous understatement. The room is so large that none of the closeness of a crowd is felt; instead, the room, and those inside of it, feel empty and exposed. A rail placed an excessive two metres away from the stage inhibited any sense of intimacy and left little room for any substantial crowd to form. Even if a crowd had formed, the excitement would still have been diminished by the remaining seats that allowed those who were not in the mood to sit out and pass silent judgement on the dancers.

The Mellotones, who are described in their press release as “Halifax’s premier dance band,” played an accessible and varied set, but were clearly overtaxed with the two hours they had to perform, and were forced to divide their performance with an intermission. “Superstition,” “Ain’t No Love in the Heart of the City,” “This Is Love,” and “Get On Up” were some of the evening’s highlights. However, crowd engagement was minimal until The Mellotones played a beautiful rendition of Daft Punk’s “Get Lucky” at the end of the their first set—at which point the crowd finally began to abandon their inhibitions and dance, demonstrating that the old jazz, R&B, and reggae classics had gone to waste.

This year marked at least the second consecutive time in which First Class Bash suffered from mediocrity, which may continue to be the case until Mount Allison gains a dedicated space for this kind of event. Last year’s concert, headlined by the popular band Dragonette, was also diminished by those Con Hall seats, which forced the dancing crowd into an uncomfortably tight space. Many reported that even breathing became difficult, while an already uncomfortable event was exacerbated when the option to stay in one’s seat and passively experience the performance became most attractive.

In a town with its fair share of noted and appropriate venues, it is unfortunate that First Class Bash is consistently held in one that is clearly substandard. In previous years the event has been held outdoors, which produced great atmosphere and memorable performances, although this is not a practical choice considering the often unpredictable September weather. Perhaps the Purdy Crawford Centre for the Arts will fill this void with its promises of a theatre, although that space may suffer from the same tragic flaws that plague Con Hall as a rock ‘n’ roll venue.