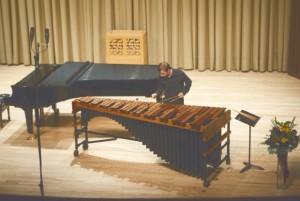 In addition to serving as an enjoyable evening of music, this event also provides an opportunity for music students to see their instructors in action and witness a sample of each faculty members’ preferred style and area of expertise. From romantic-era piano etudes to evocative Italian opera and dissonant, experimental duets, Mount Allison’s music faculty collectively succeeded in taking their audience on a tour through a colourful variety of musical styles and moods.

This evening was also made special by the unveiling of the music faculty’s newly acquired Yamaha CFX Concert Grand Piano, an exquisite and prestigious instrument generously donated by Mount Allison alumni Heather and Ian Bourne to assist in the continued improvement of the university’s music program. The concert therefore opened with a piece specifically composed by Mount Allison’s own Kevin Morse to highlight the instrument’s dynamic abilities and warm tones. Performed by piano professor Stephen Runge, the piece imitates the tuning process of a piano by beginning with a single, repeated note, and steadily building complex chords around it as the piece progresses.

This would not be the last story that this beautiful new instrument would tell during the evening, however. In addition to serving as vocal accompaniment at the hands of Stephen Runge and Lynn Johnson, music theory and history professor Gary Tucker performed a Tobias Picker piece entitled “Old and Lost Rivers,” a flowing composition inspired by the convergence of Old River and Lost River in eastern Texas and a bit of unintentional poetry provided by a nearby road sign.

While the impressive new piano received a sizable share of the limelight, the concert adequately featured a wide array of other instruments, including guitar, clarinet, cello, and flute. One memorable performance was percussion instructor Joël Cormier’s solo rendition of the “Frère Ange” suite on marimba. Written by New Brunswick composer Christian Hébert and featured on Cormier’s 2012 percussion album entitled Les Voiles Blanches, “Frère Ange” is a mind-twistingly experimental piece that harnesses the ethereal tones and percussive complexity of the instrument to provocative effect. Another crowd favourite was opera instructor Monette Gould’s breathtaking performance of three short songs from the 19th and early 20th century. Featuring works by French composers Berlioz, Fauré, and Poulenc, Gould’s enchanting soprano vocals and cheerful personality concluded the performances, quite literally ending the evening on a positive note.

As university students, it is easy to become thoroughly immersed in our chosen area of study and the balancing act of life, causing us to sometimes forget the immense amount of hard work that Mount Allison’s faculty continues to do both inside and outside the classroom. This event, therefore, begins the academic year with a reminder for both students and instructors that the benefits of education and the joys of musical performance are an ongoing, lifelong process.