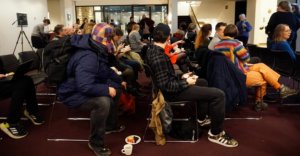 “[The Handmade Assembly] is a really important thing to have in the community,” said Lucy MacDonald, the curator of education and community outreach at Owens Art Gallery. “Sackville of course is a community full of artists and they are part of the [event’s] conversation.”

From last Wednesday to Saturday, the Owens Art Gallery and Struts Gallery and Faucet Media Arts Centre, supported by Mount Allison’s fine arts department, organized The Handmade Assembly, a series of workshops, talks and presentations that aims to bridge the gap between what is considered craft and art. According to the event’s organizers, The Handmade Assembly “interprets the ‘handmade’ in the widest terms, embracing interdisciplinarity and wide-ranging critical inquiry.”

Currently in its ninth year, the event started as a response to an increased interest in crafting across the country. “Amanda Fauteax [the former director of Struts Gallery] noticed that there were a lot of contemporary artists who were using craft practices or traditions in their work,” said Emily Falvey, the director-curator of the Owens. “They wanted to create an event around that. But they wanted it to be focused on practice.

“Instead of an exhibition it would be a series of workshops with talks and performances [that] would just bring everyone together for a short period of time to share ideas and inspire each other,” explained Falvey.

The workshops featured very different topics, from the creation of a camera obscura with Hogan-Finlay, to learning to crochet with the Queer Mummer (Morneau’s alter-ego), to ropemaking with Mullally and bannermaking with Bursey. Logan MacDonald’s workshop examined archival materials, while Huyer taught participants to make their own inflated forms.

“A really dynamic group of artists came together,” said Lucy MacDonald. “We find that every year it’s different because … these artists are coming from across the country and bringing very different practices.”

Larry Weyand’s exhibit Peeling the Sticker Off An Overripe Pear opened at Struts and Faucet. Weyland’s hooked rugs are made to look like different food items. Her hope is to start conversations around mental health, trauma, dysphoria and coping mechanisms that she first witnessed around the dinner table.

Meanwhile, Paul Butler’s The Collage Party had its opening night at the Owens. The Collage Party is an open studio where anyone can stop by to make collage and have their work featured as part of the exhibit. The space will be open until Dec. 15 – I highly recommend stopping by to de-stress during the last few busy weeks of school.

There were also talks and performances. Morouney’s performance Tell Me Something Good invites observers to leave messages that are then translated into Morse code and woven together with a small tabletop loom to become one long piece of fabric.

An important element of the event is the Heart & Pocket Revue, a yearly crafters market that features artists from within the local community. This year it was located on the upper floor of the Royal Canadian Legion, where over two dozen vendors gathered to sell their art.

“It’s one of those opportunities to bring the town and the University together and I feel it does a good job of that,” said Falvey.