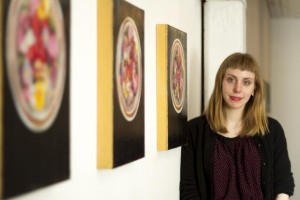 Posy Legge is something of a flower girl, as both her name and the title of her recent START show would suggest. “Flower Girl” featured a collection of paintings and drawings that explored the various social uses of flowers and their symbolic significance in Legge’s own life.

The nostalgic and autobiographical exhibition chronicled moments in Legge’s personal coming of age story, using flowers as the unifying symbol.

“I’ve always loved flowers and attached different mythical attributes to them,” Legge said. “I’m also interested in the way society uses and has used flowers, like as a symbol for women, virginity, and innocence. There are so many connotations with flowers, like love and loss, weddings and funerals, and they’re always tied to big events that happen in the life cycle.”

Legge’s works were distinctly personal but still accessible to the viewer. They managed to maintain a sensitive balance between the personal, and the universal, as her paintings touched on relatable themes like the loss (or conservation) of childhood memories, the nuances of feminine identity, and the process of growing up. The name “Flower Girl” is not solely representative of Legge’s own life, but also points to larger associations between the flower and femininity that audience members can identify with.

Legge notes that her use of traditional media also allows her work to reach a wider audience, while still representing her own experiences.

“There is something really pleasing to me about media that feels nostalgic,” she said. “I also think that more people can connect to traditional media sometimes. Paintings and drawings are more accessible to people.”

One of the most impressive parts of Legge’s show was its beautifully cohesive curation. In a basic curation technique, Legge picked up on the colour schemes in her pieces, and placed the most complementary images next to each other, thus highlighting specific elements of each work. The pieces simultaneously blended together while standing on their own.

But the aesthetic element of Legge’s curation was secondary to its conceptual groupings. Her pieces depicted various moments in time, beginning with her childhood, and continuing into the present. Instead of displaying her paintings chronologically, Legge used a nonlinear presentation, mixing the past with the present.

The effect gave the entire exhibition a whimsical, dreamlike quality. The lack of chronology didn’t make the pieces seem fragmented or detached, but rather gave the exhibition a more organic feeling. Like the lifecycle of a flower, Legge’s paintings and drawings seemed to cycle around each other, showing the connective and formative elements of the past to the present.

This idea of cyclicality is echoed in the works themselves. One of the most touching and memorable parts of the show was Legge’s various depiction of her so-called “fairy soup.” Legge admitted that as a child, she wholeheartedly believed in faeries. When she was young, she would place flowers in glass bowls filled with water outside her house. These were offerings of fairy soup for the creatures to eat when they came to visit her. Because Legge’s mother thought this habit and fascination was cute, she would empty the bowls every day, allowing Legge’s fantasy to persist.

On one wall, a series of small, framed watercolour paintings chronicled Legge’s recent attempt to re-create her childhood habit. For one month this year, she placed fairy soup outside of her Sackville home, and documented its decomposition. In the first painting, the flowers were fresh and vibrant; in the last, they were brown and wilted, and the cold had broken the glass bowl.

On the opposite wall, three larger paintings figured the fairy soup once again. Lit against a black background, in these paintings the soup seemed was dramatic, otherworldly, and somehow enduring.

The fairy soup collection was tied together by a small installation located in front the central wall of the exhibition. Here, Legge had once again recreated the fairy soup, as she placed fresh flowers in glass vases, completely submerged in water. Between the exhibition’s opening and closing dates, the flowers began to wilt in their vases.

Although the flowers themselves are ephemeral objects, Legge captured their symbolic longevity throughout her exhibition as a whole. By mixing fact with fantasy, and the ephemeral with the timeless, Legge’s pieces capture the cyclical, yet and resilient nature of both flowers and imaginative experience.

“Flower Girl” was at START Gallery from March 19 until April 1.