Rachel Thornton’s ‘Then so Be It’ opens at START 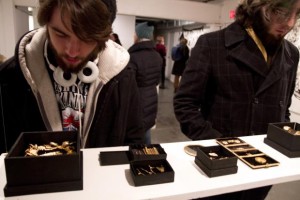 Rachel Thornton, a third-year fine arts student, unveiled her exhibition entitled “Then so Be It” at the START Gallery this Friday. Thornton describes her work as “revolving around the idea of collecting objects, collecting small moments or hand gestures, and collecting symbols.” Although this obsessive collection defines her work on a surface level, it is more appropriately described as a collection of symbols which allude to religion, feminism, and the intersection of the two themes.

Thornton used a variety of media to fill the space of the gallery with complex imagery that ranged from gold painted found objects that sit on two shelves suspended from the ceiling, to large intricate circular drawings and paintings, to lithograph prints of her hands scattered on the wall.

The main goal of the project was to explore her interest in religion, and her personal connection with spirituality. The obsessive mark-making evident in the large, circular drawings that depict imagery from Christianity, Judaism, Paganism, voodoo, and witchcraft are examples of how the process of creating can put the artist into a contemplative or meditative state that Thornton equates with spirituality.

“It was like a learning process,” Thornton said. “I was never really religious when I was younger and my family isn’t super religious, but I think that it is really easy to identify with a lot of Christian values; although, I can also identify with pagan values, and the stories that come from those religions.”

Thornton notes that she practices her own spiritual rituals in an unorthodox manner. “My whole life I’ve always collected these strange, small, and shiny objects… anything that’s small and free, I have to have it.” By painting these objects with gold dust and displaying them as if they were presented at a museum, she is able to convey their ambiguous and perhaps objectively arbitrary importance to the viewer by re-presenting mundane objects as religious idols.

Because Thornton combines and connects distinct symbols from a variety different religions,

she believes that she can connect with a wider audience. “Religion is so important in finding your community, and being able to connect with other individuals, and I think that art is a way to do that,” she said.

Thornton has also been examining the historic role of women in the church—specifically how they have been represented as villains in many religions. She is able to depict this idea through imagery related to selkies and witches—two mystical creatures from different ideologies that personify the exclusion of women from organized religion as a whole.

“[Feminism] is not at the forefront of my work, but it is becoming more important to me… and I think that the fear of empowering women is something that is personified in witches and selkies,” she said.

One of the primary recurring images in the exhibition is the image of Thornton’s hands. This motif is used as a way to explore the historical norms of both religion and the home, and how a woman’s role has traditionally been to create a functioning domestic life. The simple act of creating work is a way of expressing this idea of gender roles within organized religion.

Thornton’s exhibition can be seen at Struts Gallery on 7 Lorne St. until Tuesday, Feb. 18.