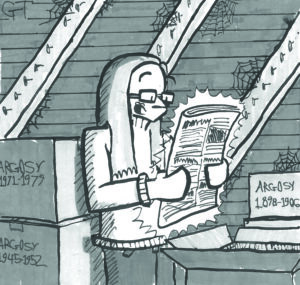 Mt. A  students and past Argosy writers share their memories of the Argosy

Most Mt. A students will have encountered The Argosy at least once in their lives. It’s inevitable really, since our newspapers are all over campus and throughout the town. The Argosy has been around since 1872; that is, 150 years, or five generations, which is an incredibly long time. To put the latter into perspective, a fifth generation relative would be a great great grandparent. Because the newspaper has been around for so long, it has left an impression on countless individuals, many of whom have memories to share. To celebrate The Argosy’s 150th anniversary, we have put together some recollections from folks that have worked at or read The Argosy.

Many past Argosy staff recalled grueling production nights where editors would stay into the “wee hours of the morning” to get the paper ready for print. One previous staff member described The Argosy as a “lifestyle” around which their university life revolved. They reminisced over scraping together coins with other staff to buy snacks from the vending machine after an evening production which they dubbed “the breakfast of champions.” Some people spent so much time in the Argosy office that pieces of furniture were named after them.

There was an evident evolution of print technology in the staff’s memories.  A previous managing editor recounted that their claim to fame was getting The Argosy’s first computer to help out with production and revolutionizing the process. They stated that it cost $3,000 for a MacPlus computer and despite the initial pushback, Mt. A. agreed to pay the price. Prior to the computer, staff laid out the paper on “physical boards with knives and glue. We shipped the pages to the courier that way.”

Many friendships were formed through The Argosy as well: a comradery created by stressful production nights, energetic pitches, and being driven by a common purpose. Sandy MacIver, a previous sports reporter, and later editor-in-chief, shared their memories 51 years after their initial involvement. He recalled his first week on campus and having his heart set on joining The Argosy. At first, he was intimidated by the senior staff because of how mature they seemed when compared to a first-year student. “I nervously walked by the door at least half a dozen times before I dared to go in,” they said. Other memories he shared were from his editorship year, when, MacIver proudly claimed, the staff knew they had reached their objective of “being read by ‘almost everyone’ on campus.” He remembered when he was on the front page of the publication after winning the 1974 Rhodes Scholarship and the layout team gave him the caption “Would you trust your daughter with this man?” A final memory shared by previous editors was the bittersweet and proud feeling that came with printing the last edition of The Argosy under their editorship.

The Argosy office was not always in the student center; according to Jocelyn Penney, a current student at Mt. A, it was previously in the basement of Centennial Hall. “The Argosy office was a hive of activity;” they explained that many student services such as the mail and even the Dean of students’ offices were located on the same floor at the time. She also remembered The Argosy’s coverage of a big snowfall in 1992 which was featured in a recent Argosy story from February 2022 of an equally bad snow storm.

The Argosy also continually inspires people. Everyone I talked to that has previously worked at The Argosy has stated that some part of the skills they developed there have helped them in their current careers or sent them further into careers in journalism. One student claimed that an article written by current reporter Hannah Lucas inspired them to go see The Midnight Train.

It has been 150 years and The Argosy is still going strong. Each year, new staff join our team, new students and townsfolk become Argosy readers, and more monumental events happen in Sackville. New memories are formed and The Argosy is there to act as a photo to recall events and reflect on experiences.