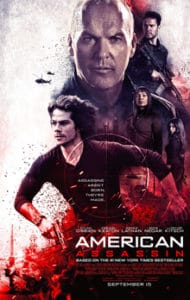 I’ll just get out there and say it: This is a bad, thematically obtuse movie that eerily glorifies real world violence without any objection to the brutality unfolding onscreen. Our protagonist, Mitch Rapp (played by Dylan O’Brien), is quite honestly a walking, talking gun. His only personality trait other than He Can Shoot And Stab Real Good is that he doesn’t like to follow orders, making him a loose cannon of sorts. If he isn’t exhibiting one of these two characteristics, he’s making a joke that never – and I mean never – lands. A bored Michael Keaton, who plays Stan Hurley, is no better, as he essentially functions to highlight how wild and uncontrollable our boy Mitch is.

The plot is horrendously complicated – at the expense of its characters, I might add. Everyone is so busy inorganically sharing plot details that there isn’t a single moment left to add any real character depth. The film’s femme fatale Annika, played by Shiva Negar, is painfully underutilized; her entire character is a plot twist that doesn’t amount to anything. In Annika, we find American Assassin’s greatest flaw: It mistakes plot complexity for narrative quality. It forgets that we need to care about these people in order for this all to work and, unfortunately, there’s no emotional core to grab onto.

Technically speaking, the movie is passable. At times the editing can be abrupt and the visuals confusing, but generally speaking the film flows acceptably well. In terms of production design, it’s visually bland, with most of the major characters wearing earth-tone shirts and cargo shorts that causes everybody to look indistinct and unmemorable. In the age of  John Wick, Atomic Blonde and Skyfall, an action film this visually uninspired is inexcusable.

So, how about those action scenes? Considering they are the crux of this movie, they’re fine, but shockingly brutal, which initially encourages further analysis. They seemingly promise the depth that American Assassin sorely lacks. Unfortunately, in confronting the film’s casual violence and, by extension, its shockingly cynical treatment of human life, it’s soon revealed that the film’s lack of depth makes brutal violence for its own sake, which comes off as tasteless.

American Assassin is firmly set in our world and revolves around real events. In fact, the Iranian nuclear deal is a central plot point. The film navigates the heavy topics of nukes, backroom deals and complex geopolitical landscapes with such masculine gumption that it’s characters don’t seem to care that millions of people could consequently die. You know how in most movies with big bombs as the central threat the protagonists are motivated by a desire to save others? American Assassin doesn’t ever mention the people at risk. It frames a nuke as an attack against the United States of America instead of against Americans, and that’s a huge difference. It could be read as an obscure critique of the military industrial complex, but this movie is far too stupid for that to be intentional. The film’s ending serves only to cement this cynical disregard for human life, coming across as shocking and weird: It puts brutally little value on human life while presenting no substantial criticism of the of the real world events it’s drawing on.

I have no doubt that in 50 years American Assassin will be analyzed as a cultural artifact of this era of neoliberal militarism we find ourselves in. But for right now, it’s just a bad movie.