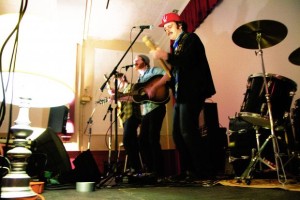 Day two of Stereophonic was a night not to be missed, with something to please music lovers of every persuasion. An eclectic mix of country, indie rock, folk, power pop and post-punk kept audiences dancing, singing, and moshing until the wee hours of the morning.

The night began with the crooning country ballads of Saskatoon’s own Zachary Lucky, a Canadian cowboy who mesmerized the audience with his blues-inspired acoustic guitar and lyrics celebrating life on the Canadian prairies.

“Is there anybody here from Saskatchewan?” Lucky asked the packed crowd at the Vogue Cinema. When no one raised their hands, Lucky continued, “Well, I know that you all probably think that we just spend our time farming and curling, but be honest, doesn’t that sound pretty darn good?”

Lucky then transported the audience to the farms of his childhood, recounting stories embodying the simple pleasures of country living.

Lucky was followed by Klarka Weinwurm, a Sackville band that chilled out the audience with their slow indie tunes and shoe gaze inspired vocals. The band jammed on the stage while their oversized silhouettes leered over the audience from the Vogue’s screen.

Rounding out the show was The Legendary Golden River Show Band, which brought the audience out of their seats and into the aisles to dance along to the group’s upbeat blend of country and classic rock.

The beats got heavier and the music got louder at the evening’s second show at George’s Roadhouse. Sackville’s own Kavorkas took the stage to thunderous applause, prepping the audience with their home-grown blend of indie-rock.

The concert segued to Jon Mckiel, who charmed the crowd with his signature blend of folk and alternative garage rock. The intimate stage at George’s offered Mckiel’s fans a chance to get up-close to the Sackville native who also appeared at last week’s Winter Carnival concert aside Hey Rosetta.

Closing off the night was Coach Longlegs, a St. John’s, N.L.  band with members hailing from Halifax and Montreal. The group’s intense punk sound brought the concert’s energy to a fever pitch. The trio dazzled the audience with hits such as the optimistically titled “All You Have To Do Is Try.”

Drummer David Barclay explained that the song was partially inspired by the band’s success at Sackville’s own Sappyfest, which was the band’s first performance outside of Newfoundland. “What’s important is going out and doing what you want to do,” shouted Barclay from the stage.

Keyboardist Juls Generic agreed. “The song shouldn’t be read in some neo-liberal way where all you have to do is try and you will succeed; if you don’t succeed, who cares?”

This sentiment was followed up in “Give a Shit,” which had the audience singing along to the chorus, loudly proclaiming “we don’t give a shit” from a packed mosh pit.

Day two of Stereophonic was a rousing success, introducing audiences to a full spectrum of East Coast artists who offered a smorgasbord of musical styles to please every palate.