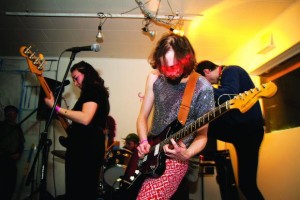 A dollar store disco ball hung from a metal chain in the middle of the ceiling at Struts Gallery, but the music that would fill the venue throughout the evening was anything but disco.

The evening began with Union Suit, a self-described post-rock and noise musician, whose suitcase full of effects pedals were used to layer dense walls of guitar noise over one another, creating a dystopic soundscape. Hampered by issues with his loop pedal which led to the opening two songs cutting off after a minute of buildup, the guitarist was forced to improvise his set.

It is admirable that the musician was able to fill a set without the pedal that was essential to his performance, but the lack of structure through the 30-minute set made it hard to enjoy, especially considering post-rock is such a structure-driven musical form. As the set went on, the guitarist slowly descended to his knees as if he were praying to the gods of distortion, fiddling with pedals in his case and holding his guitar to his amp to abuse the sounds the instrument was emitting.

Zakary Slax followed, playing a set of in-your-face punk rock. The lead singer was dressed in tight pink pants, a sequin glittering tank top, and light up glasses, shredding out quick jams and engaging the crowd like a bizarro glam boy. The band was the tightest of the acts of the night, chugging through their set like a four-headed punk rock hydra. Several plodding breakdowns provided the only respite in these hard hitting tracks.

The night was closed out by Halifax outfit Old and Weird. The group was comprised of three women, who played loose indie rock driven by pop-conscious melodies and vocal harmonies that created an off-kilter sound, in the best way possible.

Though the three acts were not stylistically similar, the lineup worked well and provided a mix that left something for any fan of modern guitar based music.

On Saturday night, people braved a rare January rainstorm to crowd into the legion for the closing show of this year’s Stereophonic. Despite the fact that the two of the evening’s acts, Heaven For Real and Monomyth, could not make the show due to the evening storm, attendance was high.

Best Fiends was the first of the bands to play, shredding solo-heavy guitar rock that sounded straight out of the So-Cal garage scene, despite the band’s Halifax origins. Every song was more intense than the one before: two-minute bursts of pure energy that kept the crowd moving. The vocals sounded like Thurston Moore channeling Ty Segall, with a heavy groove set by the bassist and on-point drumming from the rhythm section. The show was very high energy, and the sound mix was one of the best I have heard in Sackville, with every instrument audible and equally represented.

Nap Eyes was up next, and were added to the bill last minute to fill in for the missing acts. While initially underwhelming after such a high-energy show from Best Fiends, Nap Eyes picked up as the show went on. The first couple songs showed they could get the crowd as excited with their jangle indie as the Fiends could with their garage rock.

The night – and Stereophonic – were played out by Astral Gunk, a group of Sackville ex-pats who performed noise punk with an emphasis on the noise. The crowd moshed their way through a set filled with bastardized classic rock riffs and screaming choruses about being a wreck. This band has played around town a number of times through the years, and always elicit an overwhelming reaction from the crowd. This evening was no exception: the legion devolved into a crowdsurfer’s paradise.

As the shows came to an end, everyone filtered back out into the storm and walked through the slush home. It was not an issue for most, as some slush is a fair price to pay for some Gunk.