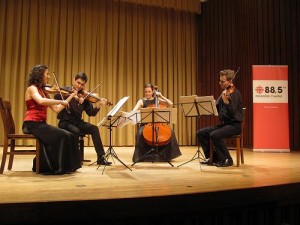 Sackville was treated to an outstanding performance by one of our country’s leading string quartets at Saturday’s Performing Arts Series concert, which featured the Tokai String Quartet. In September 2007, the quartet became the first Canadian group to become prizewinners at the Banff International String Quartet Competition since 1992.

The ensemble is composed of a unique blend of professionals who represent the international reality of the arts in Canada today. Amanda Goodburn, a South African native, played first violin; Csaba Koczó, originally from Hungary, played second violin; Moscow native Yosef Tamir-Smirnoff played viola; and Emmenuelle Beaulieu Bergeron, originally from Montreal, grounded the players with the deep sounds of her cello.

The evening commenced with a joyful interpretation of Beethoven’s String Quartet No.7 in F major, Op.59, “Razumovsky,” No.1,  which begins with a delightful melody on the cello, followed with an echo by the first violin. The second movement featured decisive and rapid rhythmic patterns throughout and changing dynamics, in contrast to a solemn “Adagio molto e mesto” in the third movement, which differed yet again from the “Thème russe Allegro,” where rapid fingering and bowing posed no problem for the accomplished players. The musicians demonstrated precision throughout the long quartet, matching and echoing beautiful harmonies. Composed in 1806, this piece was unlike other pieces of the early nineteenth century in its length and fervour.

The following piece, The World on A String, was the most unique on the programme, as it was commissioned by the quartet with the support of the Ontario Arts Council. Composed by Serbian native Katarina Curcin (b.1971), the piece represents the multicultural background of each quartet member. It began with a misty texture rather than a melody, to represent Russia, followed by a second episode in which the cello and viola used pizzicato in the style of Béla Bartók to pay tribute to music of Hungary.

The music then transported the audience to Quebec where glissando (which is achieved by the sliding of a finger along a string while bowing continuously) on the violins’ E strings evoked the image of soaring birds. The audience had no difficulty knowing when the South African section of the piece began, as a variety of playful percussion sounds, which many people never associate with string quartet instruments, blended the colours and textures of the country’s traditional music. The piece also featured the compound rhythm of Serbia. The piece was an example of the players’ musical versatility and of why they have been commended for their “emotional investment” by the Toronto Star.

The following piece was Hugo Wolf’s Italian Serenade in G Major, which captured the social music of the late Viennese Romantic period with a unique combination of playful rhythms and textures, as well as expressive calls and echoes.

The evening concluded with an interpretation of Ravel’s only string quartet (String Quartet in F Major). The first movement seemed to evoke floating on clouds, which was soon interspersed with challenging passages. The second movement was true to its name (“Assez vif. Très rythmé.”), beginning with decisive pizzicato and filled with trills and tremolo throughout. The viola began the third movement with a solemn passage, which was then echoed by the cello. The audience soon found themselves in the riveting fourth movement, which included pulsing rhythms and exotic passages.

This concert was the first in the quartet’s series of concerts as part of their Debut Atlantic tour line-up. Despite the additional pressure of recording their performance live for CBC, the musicians’ talent and passion shined throughout.