Swinging to the beat 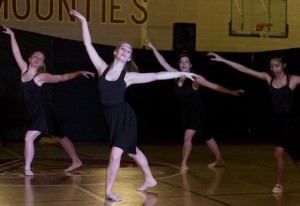 Students and community members were treated to a swinging good time on March 14 and 15, when the Mount Allison Swing Society held its sixth annual dance show. Hosted by the society, it featured eighteen different performances by Swing members, as well as the Dance Society and Varsity Dance showing off their own styles.

With such a wide variety, there was much for the audience to enjoy. Dancers were flipped, spun, and tossed into the air during the hour and a half performance, relying on their partners to catch them in time to move on to the next sequence. Dancers of different degrees of experience performed to a wide variety of songs, demonstrating to the audience the different techniques that they had practiced throughout the year: Swing Society performed swing, salsa, and tango, while the Varsity and Dance Society demonstrated their skills at hip hop, ballet, and jazz.

The show was the result of several months of practice; the Swing Society dedicates the first semester teaching the various groups new moves, while the next semester is spent preparing for the show. Although the preparations for the show began earlier this year, some of the routines still had to be pared down due to the strike.

“Typically, people who start out doing swing haven’t done it before, and it gives them a chance to try something new. It’s something that really anybody can do,” said Sarah Peverill, an instructor for the beginner swing class. “I was really proud of my students; they performed really well.”

Peverill was also a member of the advanced swing group, and took part in the final performance of the show: a fifties-themed dance to “Candyman,” choreographed by Chelsea Poole and Max Pistner, president and vice- president, respectively, of Swing Society. The performance was comprised of spectacular moves and impressive teamwork, with call backs to the dancing style of the fifties.

“[The show] was very nice. You could tell that they put a lot of hard work into the show,” said second year student Brandon Williams. “I don’t think having it in the gymnasium did the show justice, but the dancers pulled it off.”

While the dance show was held in Brunton auditorium last year, due to scheduling conflicts, this year it was held in the gymnasium at the athletic center.

However, the change in venue did not stop the performers from giving it their best. While mistakes were made throughout the performance, everyone performed with grins on their faces.  During the Friday night performance, as the advanced swing group performed to “Shiver my Timbers,” a pirate-themed piece, Pistner had to leave the stage mid-performance, as he tore the meniscus in his knee. This was due to an injury received during the first semester. However, he was back for the Saturday shows.

“It’s always stressful, but it’s a good kind of stressful,” said Swing Society Treasurer Elizabeth Nagy, listing setbacks such as injury and change of space. “But the executive always pulls together to help out, and in the end we’re pretty proud of our society,”

Nagy, a fifth-year student, has been a part of the society since her first year at Mt. A and is one of several graduating students within the society. For her, the final show is bittersweet: “I’m going to miss it; next year[‘s society] is going to be different, but still good and I hope that it continues to shine.”