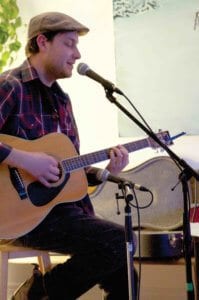 Sackville is home to a number of specialty shops, restaurants and bars that serve to make the community a fantastic personality. One such spot is Thunder and Lightning. This venue serves people from all places, and allows them a comfortable, friendly environment to relax.

On Sunday, March 11, Thunder and Lightning hosted a set performed by Richard Laviolette and his dusty rock ’n’ roll style of strumming. Laviolette is a Sackville-based musician from Guelph, Ont., who has worked on eight studio albums so far. Taking the Long Way Home, Laviolette’s latest album, was prominently featured during the line-up.

“I’m really excited to share this with you guys here,” said Laviolette before beginning his performance. A crowd of 30 watched as he plucked his way through parts of his discography and covered artists that resonated with his style.

Ken Boudreau of Amherst, N.S., sat in the ever-growing audience. “I love this place,” said Boudreau. When asked if he meant Thunder and Lightning or Sackville, he answered, “Both.” Boudreau went on, saying, “Great entertainment comes to and from this town, I come for the atmosphere here, and it is just right.” It is easy to see why an amazing space like this has such a loyal following. Boudreau comes to many local performances with his wife and other family members.

Laviolette joked with the crowd before a particularly angry number: “If anyone gets mad by this next song, and you’ve finished your drinks recently, now would be a good time to smash them off the wall.” After the laughter died out he added, “Just kidding, because I’d like to be invited back.”

The audience was made up all ages – kids as young as four or five were dancing to Laviolette’s smooth chording and strong voice. “This place is great.… It brings in everyone,” said Dr. Danielle Douglas, a professor from the psychology department. After only nine months in Sackville, Thunder and Lightning has had a vast impact on her life. Not only has she made many friends at T&L, but Douglas was engaged to her now-fiancée there.

“It is absolutely the most queer positive space in Sackville,” said Douglas when asked about what she likes most about the bar. “It is a place for people who are just coming into town.”

Dan Bell, a first-year English student, said, “It’s a place where you can just come and relax in. It’s not too loud, it’s nice.”

As Laviolette progressed through his setlist, his lyricism became descriptive of the evening – in his words, “This is how we move together.”  People tapped their feet and listened to Laviolette as the night died down and snow piled up outside. Events like these are integral to Sackville’s unique social scene, and Thunder and Lightning does a wonderful job of promoting them. If you would like to enjoy the next one, keep an eye on their Facebook page.