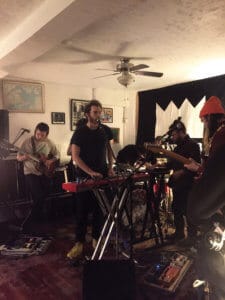 It’s 1 a.m. The show is over. I’m walking through Sackville’s bitter cold to my apartment. I’ll probably just fall into bed and wake up the next morning with a concert hangover. I enjoyed the music – I definitely did – but I can’t help but wonder how much the venue contributed to the weird sense of nostalgia I already feel forming for a performance I just attended out of obligation.

This was my first concert at Thunder and Lightning. It was an undeniably intimate experience and, frankly, I never would’ve expected the bar to double as a music venue so well. But it does, and excellently.

All the typical Thunder and Lightning eccentricities were there. The space didn’t change into a concert hall – what was available was just repurposed. The eclectic taxidermy collection hadn’t moved, and the strings of Christmas lights still gave the room a yellow glow.

The crowd was a mix of ages; a few looked like children, and a few definitely hadn’t seen high school in a while. The normal Thunder and Lightning crowd, in other words.

Everyone fit nicely into the small, well-furnished, eccentrically decorated space – including the band, who set up in a corner. When the crowd got to its peak, the space bordered on tightly packed, but luckily navigating through the crowd remained easy throughout the night.

The whole event felt less like a rock concert and more like a speakeasy – not to trash rock shows, but they can definitely get grungy and chaotic. An unspoken code to respect everyone’s space kept the night from getting out of hand. People mostly stood, or sat, pleasantly bopping their heads to the music. When things did get chaotic, they did so in a careful, measured way, which kept comfort to the max.

The show was a double bill, with Carinae, the self-described psychedelic rock band from Hadley, Mass., starting the night. Their music felt as though it had be torn directly from the soul of Woodstock, with hippie vibes through and through. I had a chance to talk with a band member after the show and found that this was a conscious inspiration. They wanted to take the vibe of traditional psychedelic rock and compress the songs, creating a more concise sound, given that psychedelic rock musicians typically favour long, languid, imprecise musicality. Their album Eta is available on Spotify, and a new album will be released in February.

The second band, Walrus, hailed from Halifax. Their music was slightly more mainstream than Carinae, channeling Bowie with an indie twist. Their discography contains songs that’ll make you thrash, or even approach moshing territory, while other songs will keep you pleasantly swaying back and forth. The intimacy of the venue really permitted the crowd and performers to be in sync with one another, meeting each other’s eyes and matching energies. You can find Walrus on Bandcamp.

After the concert, a DJ took over and began spinning tracks, transforming the concert space into a dance floor. Those who had extra energy now had free reign to spin and swing as much as they wanted to. Slowly, the crowd began to trickle away and soon enough, I imagine, the bar was closed for the night. The space that had been a venue for music slipped back into being a bar – for the time being, anyway. There’ll be another concert soon enough, and Carinae and Walrus will be back, too. Venues where performers and entire audiences can lock eyes are few and far between – and worth holding onto.