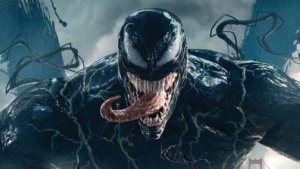 I think George Lucas must have written this one

Since school started in September, I have been looking for an excuse to check out the Vogue here in Sackville, but until now I hadn’t had the opportunity to do so. However, this past Tuesday I bit the bullet and bought a cheap night ticket to see Venom, the latest blockbuster superhero movie. I’m going to cut right to the chase with this one: I wish I had waited another week before making my way out to the theatre.

Right from the beginning, this film fails to define what genre it belongs to. Forced comedic lines are mixed in with poorly developed thematic material and needless jump scares, which amount to a confusing mess of a screenplay. At best, the plot is generic and riddled with hero film tropes, and at worst it trades in suspension of disbelief for complete disbelief that it made it past the drawing board.

Venom’s worst flaw is indeed the screenplay. As many actors know, it doesn’t matter how good your chops are; if the script is bad, delivery will be too. Lines such as “Less talking, more kissing” or the infamous “Like a turd in the wind” are reminiscent of George Lucas’ masterpiece Star Wars 2: I don’t like sand, which is NEVER a good thing.

Clearly, I don’t think that it is a very good film, but a better standard by which to judge Venom is whether it is a good superhero movie. In my opinion, all that a good superhero movie must be is two things: one, memorable, and two, consistent. By memorable, I mean to say that it contains some sort of distinguishing characteristic that allows it to stand out in such a bloated genre. Iron Man was a new thing, making it memorable. Guardians of the Galaxy took completely unknown characters and popularized them; therefore, it too is memorable. Infinity War was a film with at least somewhat real consequences, which also made it memorable. What has Venom done to reinvent the genre, or which element has it perfected to great success? I can’t think of one thing. Besides the generally horrendous writing, it is the definition of mediocre. The special effects were passable at best, and the humour, while present at times, was inconsistent. I don’t believe that this film is memorably good or bad, which I think is the worst thing a film can be.

In terms of consistency, I believe that superhero movies work best when they stick to one core concept throughout. Whether it be laugh-out-loud humour or gritty and dark content, superhero films can be successful. When they try to achieve a perfect balance of both, the result is confusing to watch and makes for cringeworthy pacing. As previously stated, Venom jumps from political commentary to visual gags and everything in between, which severely hurts the overall film in my eyes.

However, the movie is not all bad. With what he’s given, Tom Hardy does a decent job saving an otherwise terrible movie, and the back and forth between the symbiote and Eddie is the only thing that really kept me watching. Perhaps if the Venom symbiote is ultimately added to the Marvel Cinematic Universe we may get the chance to see Hardy deliver a decent performance with an acceptable script.

Ultimately, I struggled to see why this film needed to exist, and I get the feeling that Sony is feeling the same way too. It checks many of the boxes I attribute to “needless cash-cow film,” designed purely to fill a release window and keep a consistent revenue stream. I hope that if Sony makes a second film, they take a minute to sit down and figure out which direction they really want to take this series.

Do I have any final thoughts? Venom isn’t worth a full price ticket. Cheap night maybe, but I would just wait for it to come to Netflix. (Although my overall recommendation would be to skip it altogether).

VERDICT: The definition of painful mediocracy.