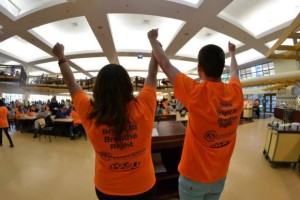 In 1961, a few fresh-faced university students at Waterloo Lutheran University decided to rally together to change the world for the better. They started small: grabbing brushes, shining shoes, and asking for donations. And that is how, in the sixties, the Shinerama campaign slowly began.

This first group of young, enterprising adults were students at what became Wilfrid Laurier University. In their very first campaign, they raised a little over $1,000. The money didn’t go to cystic fibrosis then, but to a facility in Kitchener, Ontario called the Sunbeam Home for Retarded Children (now the Sunbeam Residential Development Centre).

It wasn’t until a few years later, in 1964, that the national Shinerama campaign for the Canadian Cystic Fibrosis Foundation debuted. Eight universities and colleges joined the cause, and the funds raised by these students went to supporting cystic fibrosis research.

Shinerama’s website recounts its proudest moments from over the years: in 1971, Prime Minister Pierre Trudeau has his shoes shined, and even Bobby Orr took the time to make sure his skates gleamed for a good cause.

In 1986, the first official ‘shine’ of the campaign was given to Cystic Fibrosis Canada’s then-Honorary Director, Mila Mulroney.

In 2004, students ‘shined’ a Canadian Warship and broke all previous fundraising records.

Mt. A students have participated in Shinerama since 1970, when the campaign received $450 dollars from the Sackville contingent.

Today, fifty-two years later, Shinerama has grown well past its original size. Not only has it become the largest post-secondary school fundraiser in Canada, with over fifty universities and colleges participating, but since its creation, the campaign has raised more than $23.5 million for cystic fibrosis research.

While present day Shinerama campaigns don’t feature the excitement of hippies (though maybe some do), just as in 1961, they aim to provide students with an opportunity to give back to their communities and, of course, shine shoes for a good cause.