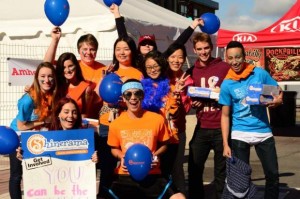 The morning of the first Saturday in September was chilly, but that didn’t stop several hundred students from getting up, throwing on their tightest and brightest apparel, heading to meal hall for an early breakfast, and boarding buses bound for greater Moncton, Amherst and Aulac.

Of course, it was Shine Day.

As the centrepiece of Shinerama’s  fundraising for cystic fibrosis research, the event brought out about seven hundred students at Mount Allison September 8. In exchange for donations, they washed cars, barbecued, sung, danced, cheered, and, of course—shined shoes.

Graham Muise, who has participated in Shinerama at Mt. A for four years, won’t consider not doing Shine Day, and feels he owes his contribution to the community.

“It isn’t fair that some people are healthy, and some people aren’t, due to a fluke of genetics,” Muise said, continuing, “with the amazing improvements we make each year, it is clear we’re making a difference. That’s why I do Shine Day, and why I help support Shinerama all year long.”

“Going into Shine Day, we were at roughly $20,000 from pre-Shine Day fundraising, and there’s a lot of stuff that comes in after the fact. I’m quite optimistic that we’re going to make our $50,000 goal, and if we don’t, it’s going to be just under,” Stark told The Argosy. Stark said placed the Shine Day total at just over $19,000, and added that the official total from Mt. A’s campaign will be announced before the end of the month.

Approximately twenty students were active on the Shinerama campaign during the summer months.

Stark believes that Shine Day benefits the students who participate as well as those with cystic fibrosis. It is the first extracurricular activity most students participate in after arriving at Mt. A, and, according to Stark, allows students to develop their leadership skills while having fun for a good cause.