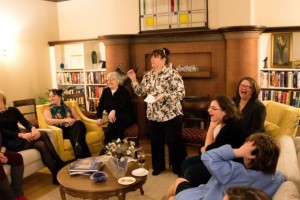 More than 100 years after the first Women’s Day demonstrations were called by the Socialist Party of America, Mount Allison hosted a week of events for International Women’s Day. Though the name and the specifics of the day have changed, women’s issues remain at the core of the conversation.

National Women’s Day was observed for the first time in the United States in 1909. It reached the international stage in 1911, through a strong push by European social democratic movements and political parties. Today, it aims to facilitate a discussion surrounding the facts that, while much progress has been done since the dawn of IWD, women are still facing unequal pay compared to men and are still underrepresented in the realms of business and politics. Globally, the health and education of women remain worse than that of men and violence against women remains at epidemic levels. It is celebrated as a national holiday in several countries across the world.

“Although physically [women] are the majority group on campus, I still feel like our voices aren’t heard as loudly and taken as seriously as we would like them to be,” said Katharyn Stevenson, the president of the Women’s and Gender Studies Society. “There needs to be a better sense of community and solidarity among female students here in order to successfully tackle and raise awareness about the issues that we face as the female student body.”

A panel on effective allyship kicked off the week of events on March 2. A talk on feminism, disability and communities was held on March 4. The Women in Leadership Conference, held on March 6 and 7, closed the week-long celebrations. International Women’s Day was officially recognized a day later. A talk about survivors of sexual assault in conflict zones, meant to be held during the week, was tentatively rescheduled for March 19.

“One of the things that I have been happy to see with the variety of events that we’ve kind of placed under the broad umbrella of International Women’s Day this year is that it’s bringing together a variety of different groups that are interested in issues of race and racism on campus, aboriginal students on campus, sexism, homophobia, disability,” said Leslie Kern, director of the Women’s and Gender Studies program.

“The broadly transformative agenda has to involve thinking about all sorts of groups coming together, acknowledging our differences, but also thinking about the ways in which we can’t just seek to transform the university to be more friendly to women.”

Kern was one of the women whom participants had an opportunity to converse with during a speed networking activity, held as a part of the Women in Leadership Conference. Other Mt. A participants included sociology professor Erin Steuter, Director of Alumni Relations Carolle de Ste-Croix, and the government of New Brunswick’s legislative co-ordinator, Melissa O’Rourke, among others. O’Rourke was MASU president in 2013-2014.

“[Women’s issues] are something that we should be thinking about every day, but it’s nice that there is a week dedicated to everybody coming together, putting their heads together and seeing what we can do to move forward,” said Eilish Elliott, co-coordinator of the Women in Leadership Conference.

Elliott and Heather Webster,  this year’s MASU president, initiated and organized the conference, which was the week’s largest event.

Held in Wallace McCain Student Centre, the conference included workshops on self-promotion and networking, engaging audiences and volunteer leadership, a presentation, a panel discussion and a keynote address by Nancy MacKay, director of stakeholder and community relations at CN.

“[The conference] was really motivated by me noticing a lack of women in student politics at Mount Allison, but also across the country,” said Webster. “We need to be encouraging women to take on leadership roles in residence, in clubs and societies and to just serve as leaders in the community.”

During her talk, MacKay focused on the under-representation and under-valuation of women in business, political and community circles. MacKay has had a 40-year career, holding various positions in both the public and private sectors.

“Many women have entered senior leadership roles, but the number of them that have been appointed to the highest position is still relatively small and they are not the ones providing the leadership of Canadian universities,” said provost and vice-president academic and research, Karen Grant.

“[Universities] are still very gendered organizations that have a long history that goes back to monastic times and the history of that remains. It may not be as overt as it was in previous times, but it’s still there,” said Grant.

Not all onlookers thought this focus had universal appeal.

“A lot of the rhetoric was about you trying harder and you pulling yourself up by the bootstraps,” said Sharoni Mitra, a fourth-year international relations student in attendance at the keynote. “[It] applies to some students at this school. I think it is aimed at traditional leadership roles and it ignores a lot of the really great leadership that is done at this school by women.”

Events at MacKay’s keynote also raised the concerns of students.

“I felt as though she did not really give any sort of direction concerning how to be as successful as she is and simply talked about her accomplishments,” said Maureen Adegbidi, a second-year international relations student who participated in the conference. “I was also very  disappointed when she did not attempt to refute a comment made by an audience member about women not doing enough to cement their place in leadership roles.”

Brittany Jakubiec, a master’s student at the University of Prince Edward Island, presented her thesis on women in leadership in the university setting and the barriers and support systems experienced by women, along with the impact of gender on leadership during the conference. According to her findings, gender inequality remains salient in academia.

Adegbidi said Jakubiec’s presentation was one of the most interesting parts of the conference, but criticized the conference as a whole, citing a lack of intersectionality.

“I definitely think this conference existing is a good thing, but it also needs more work if it wants to genuinely impact students,” said Adegbidi.

The conference held its own panel discussion, which provided an opportunity for participants to hear from the experiences of Mt. A alumni Sandy MacIver, Ainsley Chapman and Jill Rafuse, who provided some insights into their own paths in becoming leaders. Sarah Leblanc moderated the panel. The discussion centered on the current lack of women in leadership roles and the things that can be done to encourage more women to take on those roles.

While praising the organizers for taking on this initiative, Stevenson raised concerns about the inclusivity of the conference.

“It’s about becoming a leader in the business world. Not to say that that’s not important, because women need to be represented in all sectors, but it’s kind of getting to be an old conversation,” said Stevenson. “Unfortunately, although the events this week and the conference this weekend are great initiatives, I feel like it could be a more intersectional – a more inclusive approach.”

These issues, said Elliott, were something that both she and Webster considered when planning the conference.

“Obviously it’s not an ideal solution, but I think it’s also something that can start a broader discussion and that engaging with the people that may take a more radical stance, that’s a way that we can all move forward,” said Elliott.