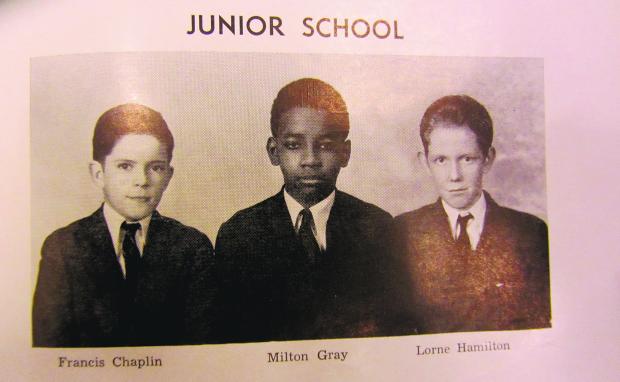 In the 1972 foreword to W.A. Spray’s The Blacks of New Brunswick, Joseph Drummond declared: “What this society has done is to tell black people ‘you are nothing’ … while at the same time trying to hide its own attitudes toward Blacks, which have remained unchanged until today.” Some would argue that his words still ring true today. Jennifer Harris, a former English professor at Mount Allison, agrees. “I think there’s been a tendency to overlook historic black populations and contributions in Canada,” said Harris.

In pre-19th century New Brunswick, the black population was similarly diverse to today’s. Historically, the population consisted of migrants who were free loyalists, slaves of loyalists and esca ped refugees. Today, their descendants are joined by black immigrants from around the world.

Despite the diversity of the group, they shared the common experience of exclusion.

While many Canadians associate the enslavement of black people with the United States, Canada has its own legacy of slavery to contend with. Spray and Harris both mention many people who attempted to escape enslavement.

In 1775, Titus Knapp, a slave owner who lived in Westmorland County, New Brunswick, placed a notice in a local newspaper asking the whereabouts of Nero, an escaped slave. This was just one of many similar occurrences. Historians have studied these inquiries and others advertisements selling slaves to learn about the conditions of enslaved black people at the time. Other sources include court records and oral histories detailing the more personal aspects of the black experience in New Brunswick.

Owning slaves was not completely accepted practice in society at the time. For example, a 1783 Quakers settlement agreement in Charlotte County, New Brunswick banned slave ownership, declaring, “No Slave Masters Allowed.” During the early 19th century, there were many legal battles. According to Spray, these were presided over by judges who were against slavery and often ruled in favour of slaves. Spray traced numerous court proceedings in the years leading up to the Slavery Abolition Act of 1833 by the Parliament of the United Kingdom.

All the same, widespread racism persisted in Canada and was part of the experience for black people who were free. For example, the Mount Allison University archives contain a recording of the minstrel “Hottest coon in Dixie” by L.E Gideon performed at the Sackville Opera House in July of 1907. There were numerous petitions on behalf of the black community demanding fair treatment. Petitions were made for grants of land, for the formation of schools for black children and for better treatment in general. Two petitions from the black community requesting schools for black children were ignored before lieutenant-governor Governor Stracy Smyth decided to take on cost of opening a black school.

These forms of racism in New Brunswick persisted into the 20th century. The black people who did remain in New Brunswick were barred from living in predominantly white areas by realtors who refused to sell to them, and landlords who refused to rent to them. These practices continued into the 1970s when Spray wrote his book. In Westmorland county, Harris writes about a “gentleman’s agreement” to barring certain groups from living in the area. Black people in the province did not have fishing rights until the 1840s, despite a 1795 petition requesting these rights. Many employers in cities such Saint John and Fredericton did not allow black people to get well paying jobs both through legislation and through hiring practices.

At the time of Saint John’s legal incorporation in 1785, freed slaves were not issued permits to practice trades in Saint John because they were not considered “free men of the city.” The mayor could issue special permits to those he deemed “decent” men. In Fredericton and around the Maritimes, most black people were typically confined to jobs that required manual labor due to racist hiring practices.

There was segregation in churches and schools. When black children did go to school with white students, they were often made to sit at the back of the class.

Mount Allison’s current archivist, David Mawhinney, recalls a story by Seth Greenwald about how the colour barrier was broken when he shared a room with Walter “Bubbles” Peters. Mawhinney said that segregation existed unofficially between students living on residence into the 1950s. Greenwald, a white Jewish student, offered to room with Peters, who did not have a black roommate.

“I think it would have been challenging,” said Mawhinney. Another black student, Daniel Gray, told Mawhinney that he could not get his hair cut anywhere in town and had to travel to Amherst, N.S.

Mawhinney also said that he suspects that the arrival of black students at Mount Allison had a lot to do with the first female registrar, J.K. MacInnes, who admitted applicants from diverse backgrounds, including Greenwald and numerous black students from the Caribbean. The arrival of the first black professor came in 1987 with the hiring of Sada Niang in the French department. Mawhinney suspects that the comparatively long time it took to hire a black faculty member was because of the greater stakes involved in moving to New Brunswick and not just briefly studying here.

Mt. A has recently come under scrutiny because of racist incidents on campus. Maureen Adegbidi is a member of the Mt. A group Black Students for Advocacy, Awareness Togetherness and grew up in New Brunswick. BSAAT played a big role in bringing attention to issues of racism on campus.

Adegbidi spoke about her experiences growing up as a black person in the province. She said, “We literally had one page about black history in one of our history books.”

Adegbidi said she would have liked to have had a better knowledge of black history because it would provide her with a “sense of belonging”.

Graduated in 1958. Was running back on the Mount Allison football team. He later joined the army where he was the first black Canadian to fly a Snow-bird. Jennifer Harris notes at least one case of a white passing student attended the woman’s college from Bermuda. Milton Gray is the first recorded Black student to attend Mount Allison at the Mount Allison Academy in 1941. He went on to go to university with his brother Danny Gray. Livingston Johnson was the first graduate in 1951.

Was a leader in the New Brunswick black community. He escaped from slavery, then served in the army. He was with a group of black loyalists who left Nova Scotia after facing exclusion. In New Brunswick, Peters was active in the fight for equal treatment of black people in the area. He lead migrations to Sierra Leone, where he briefly served on the government there.

Hodges was an activist committed to fighting racism and improving labour relations in the province. He was a founding member of the New Brunswick Association for the Advancement of Colored People . He was also the first black officer in New Brunswick Federation of Labour. Hodges had many other accomplishments, including being the first visible minority to sit at the Saint John City Council.