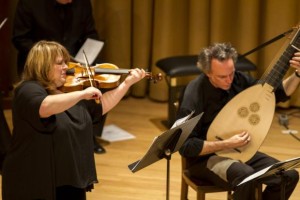 At their most recent concert, Sackville-based ensemble Sacabuche presented a series of never-before-performed compositions. Unearthed from Linda Pearse’s research on the Renaissance and Baroque periods, the ensemble collaborated with other talented musicians to perform previously unheard Italian motets.

“Tonight’s performance mounts the first full performance of the works from my publication and brings these unknown yet worthy works to our audience,” said artistic director and baroque trombonist Linda Pearse. And indeed, the audience had the privilege of being witness to both a piece of history and history in the making.

A motet is a highly varied choral musical composition. The motet was one of the pre-eminent forms of Renaissance music, but the concert mostly featured pieces from domestic sacred chamber music from the baroque era. The performances consisted mainly of pieces for 1 or 2 solo voices, 1 or 2 solo instruments, and an organ.

The ensemble performed beautiful and lesser-known repertoire for sackbut (a type of baroque trombone), organ and voice, periodically joined by violin, theorbo and a wooden flute. “[Tonight’s performance] is of great personal as well as musical value,” said Pearse. “Since 1977, I have located and collected 17th century Italian sacred motets with specified trombone parts.”

The complex and interwoven parts, which were each exquisitely delivered, made for a deeply expressive and emotional performance. The trombones’ soft and flexible sounds complimented the vocals. There was a delicate interplay between instruments and voice, which accompanied one another while simultaneously melding into one larger harmonic surge of sound. The overall impression was one of a patchwork of voices and sounds as it became difficult to distinguish sung parts from other instrumentation.

The level of collaboration demanded by the performance was worth commending. The lack of a conductor meant that each performer had to rely on one another for cues, tone, rhythm and pace, without any verbal communication. Soaring vocals were at times independent from one another, while at other times, they harmonized and built upon a larger sound.

The beautifully arranged pieces involved melody lines which were passed from one instrument to another, giving the part a new voice while simultaneously tying the whole sound together. Meanwhile, other instruments added support, emphasis or dimension, blending all the sounds together to create one interwoven sound. This was maintained until the last wavering note which left a chill in the air, and resulted in a well-deserved standing ovation from the audience.

Pearse, who is the brass instructor at Mount Allison, maintains an active performance career with her brass ensemble Atlantic Brass, and appears regularly as a soloist. Pearse is currently working to record the compositions performed by Sacabuche.