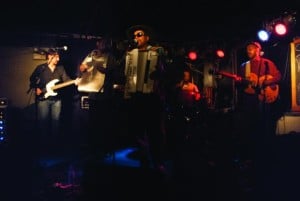 Once a hotel, then a tavern, a “beverage room,” and finally a roadhouse, George’s once hosted five shows a week. Day after day, students and community members would make the trek to the dim bar on the edge of town. Today, it sits closed most days, opening only for the occasional blues show.

Now, at more than a century old, the building now known as George’s Roadhouse needs a new roof. On Saturday, March 28, eight musical artists will play to save the aging venue from retirement.

“If we can get the roof fixed, there is a good possibility we can start doing more shows down there,” said Darren Wheaton, the owner of George’s Roadhouse and Ducky’s Bar. “That’s a matter of getting enough people in attendance to make it worthwhile.”

George’s sits at the far end of Lorne Street. Its location close to the Sackville Via Rail station, the Enterprise Foundry and distance from town centre have historically been boons for business. But recently the distance has been a barrier in attracting student patrons. George’s ranked in the top 10 music clubs in Canada by a CBC 3 poll in 2009. Despite its relative fame, George’s Roadhouse all but stopped receiving regular customers two years ago. It closed its doors to regular business in 2014 and now opens only occasionally for events.

“I hate to see the music close down. It doesn’t really mean the end of the blues shows, but where are you going to host them?” said Richard Bourque, a carpenter in Sackville who volunteered to organize the fundraiser. “The building itself is perfect. The acoustics are great.”

The building was built sometime around the turn of the twentieth century, and was originally called the Intercolonial Hotel. It was a three-storey hotel meant to house travellers from the railroad, and was rebuilt following the 1908 Enterprise Foundry fire that destroyed the hotel, the foundry, and damaged the railway station.

After years of service as a hotel, owner Boyd Johnson decided to turn the building into a tavern. It took nine years to get the liquor licence approved, and it opened as a tavern in 1971.

Women were prohibited from the tavern by law until the provincial government changed the licensing from that of a tavern to a beverage room.

“Once I had opened it up, it kind of became a Mecca because there really were no other pubs or taverns in town,” Boorne said. “My objective was to expand it so that it would embrace both the university and the town.”

Back then, Boorne said the location was ideal for Sackville, which was much more conservative.

“That location was perfect. Out of sight, out of mind kind of thing,” said Boorne. “I would open up at 11, and kids would be lined up from the door to the train station. That was in its heyday.”

The upper stories of the building were removed in 1981, and Karen Mozier bought the building in 1993, renaming it Mermaid’s. Mermaid’s went bankrupt within two years.

In 1996, George Brown, who was once the lead waiter at Steve’s Beverage Room, bought the building for half of what Boorne had sold it for.  He named it George’s Roadhouse and owned it until Michael Wheaton bought it in 2001.

When Michael Wheaton died six years ago, his brother Darren Wheaton took over. Over the past century, the building has become a staple establishment in the town of Sackville. Since the 1970s, it has earned a reputation as a live-music venue  across the Maritimes and Canada.

“There is something magical about a space that is really hard to put your finger on,” said Roopen Majithia, a philosophy professor at Mt. A and a founder of the Sackville Blues Society. “A roadhouse is a bar; it’s a dive. It’s traditionally been a place where people drink excessively. So much love and affection has been lavished on it.”

When Richard Bourque moved to Sackville five-and-a-half years ago, he formed much of his social life around the shows at George’s. A musician himself, Bourque said that George’s helped him transition. Now, the shows are less frequent.

“I hate to see the music close down,” said Bourque. “It doesn’t really mean the end of the blues shows, but where are you going to host them?”

The Blues Society has been putting on blues shows at George’s for 14 years. A distinct music culture has thrived around these shows for years. But when George’s stopped hosting regular shows, the scene slowed down. “There are tons of really good musicians that you never hear of because they don’t have a place to play,” said Bourque.

Although the live music scene was still vibrant, business took a turn for the worse.

Wheaton said that rising alcohol prices and increased focus on preventing drunk driving made it harder to make a profit at George’s, as much of its revenue was based on alcohol sales. Despite Wheaton’s best efforts to attract clientele and keep prices low, he said the task became unsustainable.

Another reason patrons of the venue said the bar had closed was due to a decline in the student support it once had. Majithia said that the energy that students bring to the shows “invigorates everyone around them.” “As that has ebbed, that has left me with a real sense of loss,” said Majithia. “I think it comes down to students.”

“Can we find ways to move the whole thing back to a semblance of what it used to be?”

The fundraiser, called the Musical Marathon Benefit, will take place from 2 p.m. until past midnight at George’s Roadhouse at 67 Lorne St. Seven musical groups will perform: The Streamliners, Chris Meaney, Janet Crawford, The Mark Green Band, R. A. & Cookin’, Patrick Melanson and Richard Bourque. Admission is set at $15, and $12 for students. All proceeds will go toward repairing the roof of the historic building.

“It’s just tough times in the Maritimes,” said Majithia. “Given all the wonderful memories that have been possible because of George’s, I think it’s time for payback.”