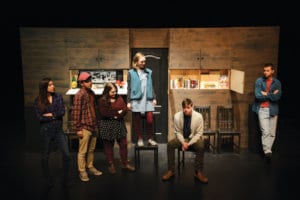 The first show staged in this double bill of performances was Hannah Moscovitch’s In This World, directed by fourth-year drama major Justin Green. The curtain rose on two girls involved in an intense physical altercation, punching and screaming as dramatic lights strobed and music blared. The scene then segued to the principal’s office where the two girls quarrelled and connected while waiting to receive their punishments.

Neyssa, played by Sertara Wilkinson, is a student attending a prestigious private school on scholarship, who holds a strong connection to her home of Jamaica. Bijou, played by Maggie Daley, is a student at the same school from an affluent, though emotionally distant, family. As they navigated heavy topics of class, race and sexual assault, the chemistry Wilkinson and Daley shared grounded the performance in sincerity. The rapport shared between them kept the play down-to-earth, while Green’s dynamic blocking prevented it from becoming stagnant.

The use of lighting and sound throughout paralleled the performance’s impact. Elements were effective when employed subtly and with attention to detail, but were jarring and awkward when they emphasized dramatic flares of intensity. Lighting and sound beautifully transitioned and flowed throughout the performance to support the mood of staged action, just as Daley and Wilkinson’s connections to their characters led them through the dialogue steadily. But as the choice to intersperse dramatic lighting elements throughout the play robbed the piece of its sincerity, occasional moments of conflict were performed too melodramatically, which forced characters to stumble their way back to the powerful sincerity maintained through moments of calm.

Beyond these moments, which are few and far between, this play was well done: well directed, well performed and well staged.

The second show of the night was No Misstakes, a fully improvised performance directed by Erik Garf. It began with a musical prelude by Kylie Fox, featuring three comedic tunes and a theme song for the show.

Loosely based around the popular improv format “the Harold,” the play featured three main storylines of interconnected characters. On Friday night, the show explored eating disorders, break-ups and the pressure to have sex. The cast did a wonderful job engaging with each other and recreating authentic moments in the lives of university students.

At times, the uncertainty of actors was palpable, and it appeared the pressure to create cohesive narratives got in the way of the performers’ abilities to connect. But when their apprehensions and uncertainties were abandoned, the piece shone. From a heartbreaking split between Lily Falk’s and Mark Nicol’s characters, the humorous confusion shared by Molly Bowes and Keegan Hiltz, vulnerable monologues by Max Farella and Carly Penrose to hilarious improvised songs by Kylie Fox, each member of the ensemble contributed to the construction of a strong, honest piece.

Both Garf’s direction and his design of a mutable format gave the performers a dynamic set of circumstances to work within. But the introduction of elaborate shelving compartments that opened to reveal props like alcohol, video games and food occasionally seemed to distract both performers and audience. Nevertheless, the construction of an environment that parallelled the cast’s own ensured the final piece was grounded in authentic experience, leading it to draw from the wealth of emotion ever-present in university life.