Support the stash! Why Movember matters 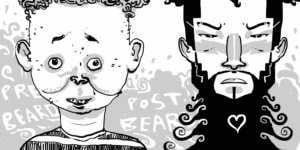 “You look disgusting.” I’ve adapted to hearing this phrase on a daily basis during the month of November. I am fully aware that I look ridiculous with a moustache, and that – like 90 per cent of men on campus – it doesn’t suit me whatsoever. However, this campaign has always been important to me and it’s something that I’ve fully supported since I could grow my first bit of peach fuzz at the age of 16.

Although the Movember campaign looks like a bunch of guys trying to play off their new look in a joking fashion, the campaign is about promoting the message that reaching out for help is crucial. The stigma behind men being “embarrassed” or “afraid” to ask a friend, family member or professional for help is what Movember is trying to change and replace with the message that “it’s okay to not be okay.”

Movember is a fundraiser and awareness campaign focused on men’s health that continues to increase in popularity worldwide year after year. The reality is, men are dying younger than they have to because of cancer, suicide and other largely preventable causes.

An unfortunate statistic is that 70 per cent of men say their friends can rely on them for support, but only 48 per cent say that they rely on their friends. We’re here for our friends, but we’re hesitant to ask for help ourselves. This stigma associated with seeking help for mental and physical wellness is important to address. Three out of four successful suicides are committed by men, a sad statistic that many people are unaware of.

The Movember campaign has grown significantly in its message, participation and outreach since 2003, when it originated in Australia. It now has official campaigns in 21 countries and has raised over $730 million to help fund over 1,000 men’s health programs. Health issues such as prostate cancer, testicular cancer, poor mental health and physical inactivity have all been focused on. Not only has Movember encouraged the growth of millions of moustaches, the campaign has also led to significant breakthroughs in scientific research and an overall positive shift in conversation regarding men’s health.

As you walk around campus for the rest of November, disregard your thoughts about how “gross” some people look with a moustache and remember that the awareness and fundraising backed by the Movember campaign impacts the lives of thousands of men annually, along with their families and loved ones. In no way is the Movember moustache an attempt to change men’s fashion – it’s an attempt to change men’s health. Support your friends and their moustaches, because, like the common saying goes, you never know what somebody else is going through.

In recent years, the Movember Foundation started the Move for Movember campaign. Anyone can work together in this campaign by setting a distance goal for the month of November to walk, run, cycle, etc., and raise as many funds for Movember as they want while doing so.

If you’re willing and able to donate to the Movember campaign you can do so online at ca.movember.com. The New Brunswick Crisis Centre (Chimo Helpline) can be contacted 24/7 at their provincial toll-free crisis line: 1-800-667-5005. Contact [email protected] to book an appointment with a Mt. A health professional.