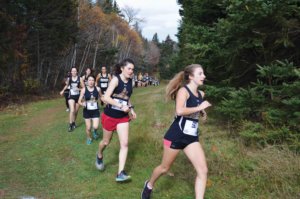 Hard work paid off this year for the Mount Allison cross-country team. They came up on top in the ACAA championships. Cross-country is a sport that hasn’t been well known on campus, but has become more and more popular due to its manageable schedule.

The team practices together twice a week all semester. In addition to this, most of the athletes do additional workouts on their own time, which helped the team earn this year’s banners.

“I think that the flexibility and convenience of running makes it an easy commitment during the school year,” fourth-year student Matt Fyfe said on Facebook messenger. “Since we only meet twice a week, it’s easy to fit running into my own schedule.”

Training on your own time isn’t common when it comes to most sports on campus. Other clubs and varsity teams often have their athletes commit hours of their time to a specific schedule on a weekly basis, which isn’t the case for cross-country.

Crosby added that the team is accepting of everyone’s training schedules and that practices are not mandatory. “There are people on the team who come to practices and don’t race. There are also people who practice on their own and race with us,” Crosby said.

The ACAA championships was a close race, with Mt. A winning by one point on the men’s side and the women also topping their side of the competition with a banner of their own. “It’s a real treat to bring home two banners this year,” said Fyfe. “Everyone’s been working really hard and it’s great to see that pay off.”

Along with the championship banners, the cross-country teams’ coach, Claire Pabody, won the coach’s award this year, despite never coaching a cross-country team in the past. “Claire pushed us hard and maintained an infectious positive attitude through the season,” Crosby said. “Our success can definitely be attributed to all of the hours Claire has put into coaching our team.”

In response to the victory, Pabody “was thrilled when we pulled off the victory at the ACAA Conference Championships! The scores were very close and our wins were the result of extremely determined racing by every individual on the team.” Pabody continued, “It was an amazing way to cap off an incredibly fun season and I was so proud to have the opportunity to coach such a great group of student runners.”

As the season has officially come to an end, the team will no longer practice regularly, but will still meet to go on group runs to maintain their stamina for future races.