The Argosy prints every week, and has since 1922 – but should it continue to? 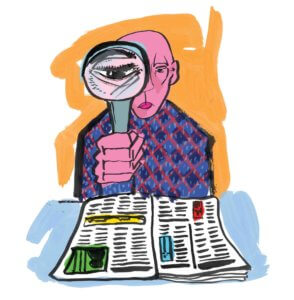 For almost 100 years, the Argosy has upheld a truly impressive tradition of printing weekly newspapers. In 1922, the paper became the Argosy Weekly after having been printed monthly and then bi-weekly since 1872.

The Argosy continues to print on a weekly schedule, and has shifted from being a smaller tabloid with clip art to a larger and more polished-looking broadsheet paper showcasing a range of student artwork.

But the digital age has pushed many newspapers to re-evaluate themselves. Two years ago, the U.K.’s Independent switched completely online, becoming the first national newspaper to do so. Just last year, the Globe and Mail announced its cut to daily print circulation in the Maritimes, citing the expenses of printing and distribution.

Changes have also been happening at university papers. The Baron at the University of New Brunswick St. John went online in 2012 after having been a bi-weekly print edition. Canada’s oldest official student publication, the Brunswickan, switched two years ago from a weekly to a monthly print edition and now publishes online continuously.

The Argosy should not excuse itself from the trend of self-evaluation. Now that there is the option of online publishing, the Argosy’s weekly printing schedule is looking to be more burdensome.

For one, printing is expensive. Last term, printing costs made up almost half of the Argosy’s expenditures. The budget, sourced mainly from a yearly $33 student levy, is potentially facing future reductions due to the decline of student enrolment. If the Argosy continues to print every week, it will have to allocate more of its budget proportionally to printing.

With more of the budget reserved for printing, staff pay might have to be reduced. Fewer positions might be paid. Exciting projects like videography or web design might suffer due to insufficient funding. Currently, the cost of a single print run is more than what the Argosy can afford to pay a reporter for the entire year – and this is considering that a reporter’s pay has more than doubled in the past two years, although not enough for it to be considered fair compensation.

A weekly print schedule also limits what reporters and editors can write about. When emphasis is placed on filling a paper every week, stories that can be finished faster are prioritized over longer or more investigative pieces.

A weekly print schedule also means that editors and production staff suffer frequently from burnout. This is because it takes hours to lay out and review pages to prepare for printing, and the routine is repeated every week. Some editors and production staff spend up to eight or 12 hours in the office on a school night. High burnout and turnover rates are an issue not just at the individual level; they eventually affect the paper’s quality within and over the years.

I think that the first step toward a less problematic publishing schedule would be to print bi-weekly newspapers and to publish online in the time in between. For example, halving the number of print issues saves enough money that we can consider paying reporters per piece. Or we could pay for new positions, like web design or social media management. We could fund our website or our videography project more.

My point is that what we save with eliminating print costs can fund more interesting and important projects. By giving reporters and editors more flexibility over their schedules, it can reduce burnout and turnover and lead to more in-depth coverage.

Unlike many news publications, the Argosy is fortunately not in a position where it has to compete with other outlets or care about print ad revenue to maintain its budget. It is, however, in a position where its print schedule should seriously be re-evaluated because there are more innovative, equitable and sustainable possibilities.

The decision to publish online with bi-weekly print issues has not yet been officially made. We are currently in the stages of thinking about what structural changes the shift would entail and how we can meaningfully spend the freed budget. These stages will also involve consulting our funders and readers.

As a paper written by students and for students, the Argosy should be directed by student input. Join us at our next funder’s meeting on Thursday, March 29 from 5:30 to 6:30 p.m. to discuss the potential transition in more detail. The meeting will be held in the Wallace McCain Student Centre in room 125. If you cannot make the meeting and would still like to give us feedback, direct your messages to [email protected] I look forward to discussing the future of the Argosy with you.