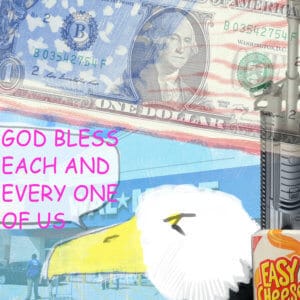 The American studies program at Mount Allison is offering a new three-credit course for the 2019 winter semester. The course will be co-taught by Dr. Michael Fox from the geography department, Dr. Peter Brown from the English department and Dr. Elaine Naylor from the history department.

The course, GENV 2991: An Introduction to American Studies, falls under American studies, an interdisciplinary program that combines literature, geography and history to analyze contemporary American society and culture.

Students will be introduced to American society by learning about the history, regional geography and culture of the United States. Topics covered will vary, and will include immigration to and migration within the United States, American exceptionalism, freedom and slavery.

Fox explained that having three professors for this class will bring an interdisciplinary perspective to the course.

Each professor will teach four weeks of the course. About her role in the course, Naylor said: “I am going to [cover] the history of divisions [in America] and play with the idea that Americans celebrate diversity and unity at the same time [as] those things are quite challenged.”

Brown said he will teach American culture through films that defined popular culture like Spike Lee’s 1989 film Do the Right Thing. “We thought we’d play off our strengths as a historian and literary scholars and a geographer and teach like, ‘This is what we know about the United States, and this is the way we think about it,’ ” he said.

Fox said that his section of the course “attempts to answer the question ‘Why is the United States described as a patchwork nation with regional place identities?’ ”

The professors are still in the process of defining the parameters of the course. “It might be interesting to look at the American-African history or Vietnam, whether in films or novels, moments of extreme division within the country,” said Brown.

Expressing her interest in the same theme of division, Naylor said, “I am thinking of going back in the history of the United States and picking points where there is controversy. What are some of the various crises where the struggles [necessarily came] to a head for the U.S.A. to truly be what it is supposed to be?”

Mt. A has not offered this American studies course before. “We thought about teaching the course last year but we were too busy during the winter semester,” said Brown.

“We think there is an interest [in the course] because students are paying attention at least to some of what is going on south the border,” he added.

Brown mentioned recent events in the U.S., saying, “We are all aware of Donald Trump at the moment. We are all aware of the appointment of Judge Kavanaugh into the Supreme Court.” He emphasized that the course will not focus on contemporary events.

“It will be interesting. We don’t doubt that,” he said.