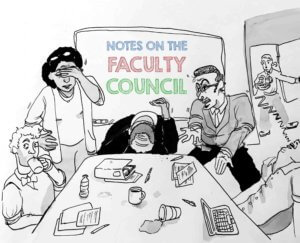 At 4 p.m. on Jan. 30, the first Faculty Council meeting of the winter semester began.

Shelly Colette, manager of academic support, spoke about a new student success course that will be offered in the winter semesters for first-year students who have a fall GPA below 1.5. Colette said that the focus of the program is personal time management and an “ethic of caring,” with an underlying goal of student retention. Colette also talked to the council about the Peer Assisted Study Session (PASS) program. The student leaders who run PASS tie the program to courses with high rates of D grades, failures or withdrawals. Currently, the program is focused on STEM courses, but Colette said they would like to branch out and encouraged any interested departments to contact her.

University Provost Jeff Ollerhead brought forward the issue of class size benchmarks: “I just wanted to alert the faculty council to the fact that I’ll be asking the deans to please look at all the courses that we have that habitually have enrolments of eight or less and think about why that’s the case.… I found a number of examples where I was pressed rather aggressively to provide resources or replacement only to find that those resources had gone to a course that may have, I don’t know, a sum total of four or five people.” He concluded by saying, “This is not an exercise to suggest that there will never be a course ever again that has fewer than eight people. There may well be good reasons as to why this has to occur. At the same time, it is an exercise to ensure that we’re providing adequate resources at the first-year level in particular, first- and second-year, but more importantly enough courses that do not have prerequisites that we don’t have students on waitlists over the course of registration.”

Ollerhead’s question prompted 20 minutes of faculty feedback. Bruce Robertson, classics professor and department head, was the first to propose an answer: “In departments where there are modest continuing numbers of honours and majors, those courses may be necessary for them to complete their degrees.” He then suggested that Ollerhead look at reallocation in terms of how many students each faculty member teaches each term instead, as Robertson said the small upper-year courses are part of the give and take with teaching those large first-year lectures. Ollerhead posited that Robertson’s proposal doesn’t solve the issue of first and second years not having enough courses.

Amid the faculty responses, President Campbell interjected, referencing a recent Maclean’s article that placed Mount Allison in the bottom third of universities for retention, saying, “I think there is another angle of this to discuss – there are numbers and there is effectiveness. As I’m going out the door, I just sense a greater satisfaction at the upper-year classes than the lower-level classes, and we’ve been having this discussion since I arrived here.”

Susie Andrews, religious studies professor and Windsor Hall don, responded, saying, “I care deeply about the first-year experience, so much that I’ll live with 200 first years, but to be an excellent institution that produces the people who are going to succeed – what are the implications if we don’t regularly offer those small upper-year courses? Who are the shining stars who we are going to work with and one day party with at conferences and write a publication with?”

After a few more faculty members voiced their opinions, Ollerhead interjected, saying, “So just to be fair, I think I heard the phrase ‘if this goes through,’ it’s not ‘this is going through.’ This is not a software coding thing that will be going into the system. I’m asking every dean, with the department heads, to look at every course that has eight or fewer people in it and ask the question, ‘Is this a good allocation of resources; does this course need to be here?’ … The idea is not to abolish the small upper-year experience, but it is to ask the resource allocation question.”

The last few professors who responded focused on the idea of prioritizing pedagogical effectiveness over resource allocation.

The Teaching and Learning Committee then brought forward their report and revision of student course surveys. The most significant proposed change was making the question options more flexible. No decisions were made; the document will be reviewed and critiqued in depth at the senate meeting this month.

After a discussion of the proposed decanal structure, Campbell ran through a few updates to close the meeting. Among other things, Campbell told the council to stay tuned for campus facilities planning additions to the library; that the announcement of the new president would go public soon; that the Mi’kmaq flag that the Mount Allison Indigenous Support Group raised funds for is ready to be put up, and they are “just waiting for the right symbolic day to do it and a day with no snow;” and that the theme of the 2018-19 academic year will be Public Service and Engagement.