Quo Vadimus: What is a liberal arts degree? 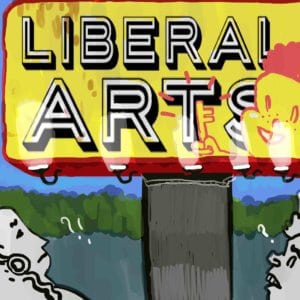 This past Thursday, Feb. 2, a group of students, staff and faculty gathered in Dunn to discuss questions surrounding Mount Allison and the concept of “liberal arts.” This was a part of the discussion series Quo Vadimus run by university librarian Marc Truitt, where faculty take turns to propose a topic, provide brief readings and bring together diverse departments and voices from the campus and community to have a discussion.

This week’s session was led by commerce professor Rosemary Polegato. The discussion began with an activity. Polegato passed out an excerpt of an email response to an article she had sent to a former student. The participants were asked to read the response and try to determine whether or not this person had gone to a liberal arts university and if this was reflected in their writing and argument.

Kutay Ulkuer, director of recruitment at Mt. A, brought up the confusion that the term “liberal arts” creates among prospective students. “Arts leads them to believe that it’s fine arts or creative. When we’re on the road, we try to convey that liberal education is all about critical thinking,” he said.

Latin for “Where are we going?” Quo Vadimus has been a recurring event for the last three years. “Quo Vadimus has its roots in the aftermath of the 2014 MAFA [Mount Allison Faculty Association] strike,” said Truitt. “My colleague and friend Eileen Herteis, then-director of the Purdy Crawford Teaching Centre, and I were looking for ways to build bridges in what we saw as a very fractured community.”

“There are usually between eight and a dozen attendees, of whom a small number are ‘regulars.’ Yesterday’s session led by Dr. Polegato was, I think, our best attended yet, with over 20, including many students!” said Truitt.

The idea to host a conversation about liberal arts was inspired by a conversation between Polegato and Rev. Perkin, the university chaplain, at Tea on Tuesdays. “Shortly after our conversation, I read an article about a survey conducted with prospective university students in the United States that showed that ‘liberal arts’ was misunderstood and subject to negative connotations,” said Polegato. “These two viewpoints – one internal and positive, the other external and negative – are clearly at odds with each other. From the perspective of my new role as the Purdy Crawford professor of teaching and learning, I wondered how Mount Allison defines itself, because how we define ourselves is key to what and how we teach and learn.”

While liberal arts remains a nebulous idea that’s difficult to define, a recurring theme in the discussion was the importance of connections – between people and across disciplines – at a liberal arts institution. “Opportunities, within and outside courses, to explore and engage broadly with ideas and other people was mentioned a few times,” said Polegato. “Mount Allison has a long history, through which graduates have maintained their connections. The challenge is to bring what may be perceived as an outdated or traditional perspective into the 21st century through contemporary ways of doing things.”