Paleolimnology reveals the life of a lake 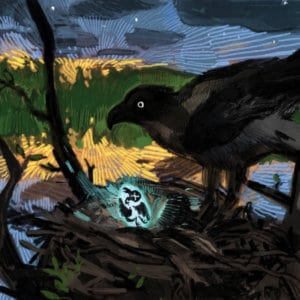 Kurek began by explaining how lake ecosystems are great indicators of environmental conditions. Kurek then explained how many lakes in New Brunswick are not safe. “You can go onto the New Brunswick chief medical officer’s website and see about a dozen or so lakes that are on the registry permanently for health advisories. Some of these lakes are in more urban areas, but many of them are remote lakes in the middle of nowhere in our forests,” said Kurek. “So this brings up a lot of questions about what is driving these potential environmental changes.”

Kurek explained that New Brunswick exists in a complex ecosystem with many different stressors that impact lakes. One of these stressors is the historic use of DDT in the province. Without the use of insecticides, New Brunswick experiences an outbreak of spruce budworm around every 30 years. In the ’50s and ’60s, New Brunswick managed these outbreaks by implementing the world’s largest spraying of DDT insecticides, spraying 12 million pounds of the chemical over the province’s forests.

Another stressor that has affected lake environments in New Brunswick is climate change, which Kurek said has influenced physical, chemical and biological processes in lakes. For example, climate change has caused the duration of ice on lakes to be shortened by about 10 days, due to later freezes and earlier thawing. “That doesn’t sound like a lot over the course of a year but if you’re a small organism and you complete your entire life cycle in a matter of hours to days, that makes a big difference to your population,” said Kurek.

Kurek’s research focuses on determining the history and recovery of these lakes using paleolimnology, which reconstructs historic lake sediment. “Materials that exist within the lake are shed and ultimately work their way into the lake sediments,” said Kurek. “The same can be said about materials that come from outside of lake systems, like DDT and other environmental contaminants.”

In maritime lakes, 20 centimetres in sediment records can be assessed to provide data for roughly the last 100 to 150 years. These data techniques were used to observe how lake systems have recovered from these environmental stressors. Kurek found that while lakes have recovered from these impacts, they are nevertheless altered by the effects of DDT and climate change.

Abbie Gail Jones is a fourth-year student doing her honours with Kurek and uses paleolimnological approaches in her own research. “I took the conclusion of the seminar to heart,” Jones said. “Even though we may try, we cannot expect ecosystems to totally recover to pre-pollutant conditions, as other factors like climate have changed since. It was kind of like a cautionary tale: We may try to help an affected ecosystem to get back to its original condition but, in reality, after a harm is done it’ll never be the same – we can only try to make it better.”

Dr. Jesse Popp and Dr. Brad Walters of the geography and environment department coordinate the lecture series. Walters said that the motivation behind the series was to get “a series going where colleagues, members of the department and guest speakers we may bring in can come and talk about research they do, not just about the courses they teach and the general subject matter that they engage with, but actual nitty gritty research.”

Popp and Walters plan to have a speaker about once a month, and students are encouraged to attend to learn more about research in these fields.