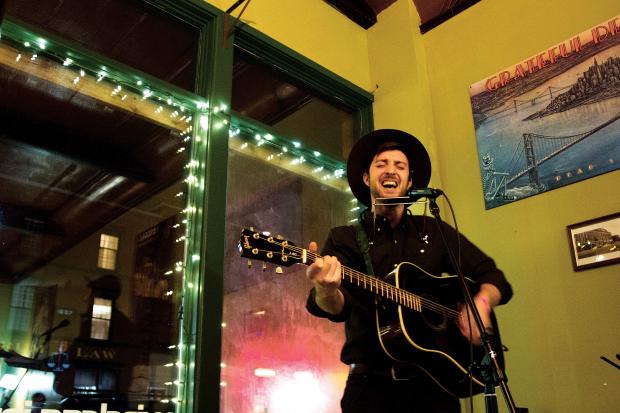 The first evening of Stereophonic 12 was a casual affair, but memorable and well-received nonetheless. At 7 p.m. on Thursday, Bridge Street Café welcomed an audience of all ages to listen to the mellow tunes of Corey Isenor and Adam Mowery. Both artists performed independently, accompanying themselves on the guitar (and in Isenor’s case, several harmonica solos).

Isenor started off the show with “The Navy Blues,” one of his newer songs. Both the song and Isenor’s voice were refreshingly original, with just enough familiar tones thrown in to be considered folk or country. Throughout his performance, Isenor remained genial and modest. His casual back-and-forth banter with the crowd members – friends and strangers alike – set a cheerful tone for the rest of the evening.

While Isenor played all originals, Mowery decided to stick with mostly covers and sang everything from Beck to Roy Orbison. While his smooth voice and mellow guitar undeniably did the songs justice, Mowery really shone during his original pieces. Mowery was charismatic and engaging, periodically wandering over to a table to casually perch a foot or two away from an audience member. Perhaps one of the most memorable moments was when Mowery put down his guitar, stepped away from the microphone, and wandered around the crowd singing a soulful a capella tune.

The Bridge Street atmosphere was perfect for the two coffee-house style performances. The small space quickly became crowded, even if some were only there to take a break from the cold with a cup of coffee. Both artists seemed happy to return to Sackville, and they maintained an air of familiarity with the audience, pausing between songs for a quick story or anecdote. Isenor and Mowery, while each distinctive in their own style and sound, complemented one another nicely and served as a wonderful lead-in to the rest of the weekend’s performances.

Thunder and Lightning in turn proved to be an interesting location for the following bands. The bowling alley, bedecked with a disco ball and lights, was a tight squeeze for the many second-wave concertgoers. The venue offered very little seating, and even less possibility for a view of the stage.

The first band to take the stage was Sackville’s Old Bones. The four-piece of two guitars, an electric bass and a drum set, was joined by Klarka Weinwrum who would play again on Friday night at The Vogue. The upbeat alternative style was completely appropriate: an easy rock which still fit the vibe of the previous Bridge Street performances. Old Bones worked well as a group, smoothly transitioning from a slow to a more energetic tempo, but with a reserved sound that prevented it from becoming overpowering.

Next, The Painful Shivers appealed to the increasingly enthusiastic audience, delivering a more rock-and-roll sound, heavy on the distortion. The band delivered noisy music to a noisy crowd, and while they remained engaging throughout their performance, their slower songs tended to be the ones that truly shone, allowing space for their subtle harmonies to be heard and appreciated.

However, the truly remarkable part of the night was when the final act took the stage and began playing. Almost instantly a hush fell over the crowd as all stopped to listen to the crooning voice of Bry Webb.

Webb and his accompanist were laid back and the music they produced was hypnotic. Their mellow, carefully-placed harmonies lulled the crowd into a trance which was periodically broken by Webb’s amiable commentary and stories. Webb’s smokey voice blended and flowed with the accompanying instruments (mandolin, lap steel and acoustic guitar) and interspersed with several intricate solos. The performance ended the night on an exceptional, albeit mellow note, and it left audience members eager for the shows to follow.