Bill C-45 sparks discussion on cannabis use at Mt. A 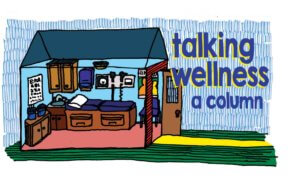 The Canadian government is on track to for passing Bill C-45, commonly known as the Cannabis Act, before June 7, 2018, to legalize and strictly regulate cannabis use beginning in July 2018. In light of the ongoing national debate, the Wellness Centre hosted a panel discussion about on the topic of cannabis use on Tuesday, April 3 in Tweedie Hall. The legalization of cannabis in Canada should rouse the general population to become more educated about it and understand any health effects and risks associated with its use.

With the imminent legalization of cannabis, it is important to become informed on how the government plans to control the production, distribution, sales and possession of cannabis in Canada, but also to understand the effects cannabis can have on your health. In the short term, it can have effects on the mind – feeling high (euphoria), a heightened sense of well-being, relaxation and an increase in sensory experiences.

However, your body and brain can also experience negative, unwanted and unpleasant effects. Short-term effects on the brain can include confusion, fatigue, anxiety, panic and an impaired ability to focus, to remember, or to react quickly. Effects on the body in the short term include damaged blood vessels (caused by smoking), decreased blood pressure and increased heart rate. In some cases, cannabis use can result in psychosis that is characterized by paranoia, delusions and hallucinations.

Over time, daily or weekly use increases the risk of addiction and can cause harm to memory, concentration, intelligence and cognition. Other lLong-term effects of smoking cannabis are similar to those of smoking tobacco – bronchitis, lung infections, mucus buildup in the chest and a chronic cough.

Frequent cannabis use has been associated with an increased risk of suicide, depression and anxiety disorders. If you are struggling with negative effects of cannabis on your mental health  – or with your mental health in general – it is important to seek help. If you unsure of where to start, you can see a counsellor at the Wellness Centre., Ior if you need more immediate attention, go to the Sackville Memorial Hospital.

The panel discussion that was held this week at Mount Allison sparked an important conversation about cannabis use and its possible effects in the Sackville community. With the imminent legalization of cannabis, it is important to become informed on how the government plans to control the production, distribution, sales and possession of cannabis in Canada, but also to understand the effects cannabis can have on your health.