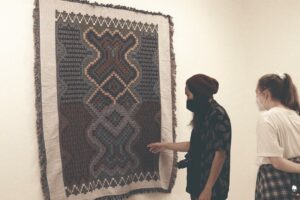 On Wednesday, October 12, Owens Art Gallery had Afghani-Canadian artist Shaheer Zazai in for their first Artist Talk since January 2020. Zazai currently has his exhibit Are We Even on display on the main floor of the Owens.

Zazai graduated from Ontario College of Art & Design University (OCAD) in 2011. At OCAD, he majored in Drawing and Painting. After university, Zazai continued to paint, but started to gain more success after posting digital art made through Microsoft Word.

Zazai described his shift to digital art as “unintentional.” He said, “It was just me messing around on Word documents.” This shift into digital art started in 2013. Zazai said, “I basically gave myself a punishment, to type 2013 dots and spaces because we all sit in front of our laptops too much.”

Working on Microsoft Word gave Zazai limited creative freedom, “Word has 15 highlighter colours. That became my palette.” His work was focused primarily on playing with colours, numbers and repetition; “My work is very much defined by rules, regulations and boundaries,” he said.

Zazai soon started to post his work on Facebook: “I used to post these on Facebook, and people responded really well to it. I was very surprised and annoyed, because I’m a painter and I wanted them to look at my paintings.”

Although Zazai did joke about being annoyed that the success did not stem from his paintings, he stressed the importance of trying different mediums. “We graduate and we think we can’t do anything else [other than what we majored in]” he said, addressing the art students in the room. “We shouldn’t force ourselves to be into one medium.”

During his talk, Zazai went over past exhibitions he’s worked on. One that was very important to him was in collaboration with Afghani weavers.

It took him a while to find weavers from Afghanistan, and once he did, he had very limited communication with them as they weaved his work. However, he was very happy with the outcome.

Because of the current political situation in Afghanistan, Zazai was at first hesitant to show the carpets he made in collaboration with the Afghani weavers: “How can I go into a room, and try to have a very nice cheerful conversation, show them colourful things I’ve made, meanwhile the country is going through what it is.”

As an artist in diaspora, Zazai felt pressured to represent his nation. “You’re put in a box, and the box is what you represent and [what] you represent is Afghanistan,” he explained. “When you’re put in the box you suddenly become the educator of that topic, meanwhile you’re trying to learn about yourself and what that even means.”

The weaving exhibition was called A Call Home and was on display at the Patel Brown Gallery in Toronto from February 12th to March 19th 2022.

Zazai’s Owens exhibition Are We Even is a collection of jacquard weavings, which he encouraged viewers to touch. It felt strange touching art at an exhibit, but it was also fun and surprising, as the material was softer than it appeared to be.

The weavings at the Owens are copies of his Microsoft Word designs. This encouraged me to look at them more closely. It was amazing to see how much detail was put into them.

“It was really inspiring,” said Rebecca Whiteway, a second-year fine arts student. “It was cool that he could do so much with a very restrictive medium,” she added.

“I like how he works from digital to textile,” said Evelynne Marchand, another second-year fine arts student; “I think it’s a cool concept to design something like a drawing and then turn it into something physical.”

The exhibit will be open at the Owens until December 11. It was wonderful to see such an amazing Artist Talk after a long two years.