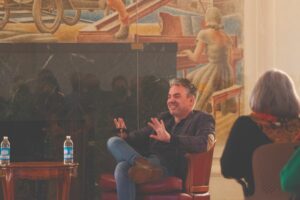 To celebrate 150 years of The Argosy, Mike de Adder, Mt. A alumnus and political cartoonist for The Washington Post, returned to the Mt. A campus for a delightful, hilarious, and at times emotional conversation with fourth-year international relations student Ainsley Cunningham. “I wouldn’t be a political cartoonist if it wasn’t for The Argosy,” said de Adder.

De Adder came to Mt. A to pursue a Fine Arts degree. “I was not a super political person; I came here to paint,” he explained. After being asked to do cartoons three times by The Argosy’s comic section editor, de Adder finally decided to give it a shot. He had been working for The Argosy for about a year when one of his cartoons spread like wildfire throughout the Mt. A community. In 1988, de Adder drew a spoof of the 1958 children’s television series The Friendly Giant to address free trade. The comic strip was titled “The Unfriendly Giant,” where he had Friendly, the giant, explain free trade. “I would go to a class and the professor would have it up on his bulletin board, I’d go to parties and doors would have the cartoon on it,” he recalled.

Little did he know, later in his career he would have another viral cartoon. “Twitter saved my career,” de Adder told the event’s attendees. On June 26, 2019, a cartoon drawn by de Adder of former U.S. President Donald Trump playing golf next to the face-down bodies of two Salvadorian migrants went viral on Twitter. On July 1, 2019 de Adder tweeted: “in the past [two] weeks I drew [three] Trump cartoons. [Two] went viral and the third went supernova and a day later I was let go. And not only let go, the cartoons they already had in the can were not used. Overnight, it was like I never worked for the paper. Make your own conclusions.” However, after being let go, the virality of his cartoon led him to continued success.

Where does de Adder define ‘the line?’ For his former employer, the Trump cartoon crossed the line, but for himself, it was a necessary push. For de Adder, ‘the line’ is decency and not necessarily the companies’ interests. “You bump into the line, that’s how you find the line,” he said. He noted that when he came up in the industry, the line where decency started began to recede. “I’m 55 years old, there is stuff in me I still have to expunge,” he said. He seemed very conscious of the need to adapt to new standards of decency as time goes on and the world evolves. “I think I know what I’m doing now, but I could hit a line next week,” he proclaimed.

As for advice, de Adder says art is “something you gotta take” if you want to pursue it. He advised current students to find the things they are good at and go for one of them at full force, not a bunch of things at half measure. In the waning industry that is print news, the number of political cartoonists has decreased over the years. Despite this, political cartoonists and artists alike should not feel discouraged, as there are still many stories to tell. So, all you artists out there, work hard and hone your craft. As de Adder puts it, “political cartooning is the most rewarding career you could ever have… if you are good at it.”