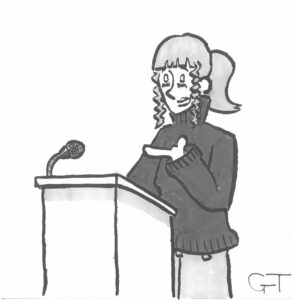 When I think of opera, the first image that comes to mind is a woman in a viking costume, complete with helmet and pigtails, whose voice is singing at a pitch only dogs can hear. I was convinced that this was the only way opera was done, and that the only time we see opera now is in relation to a certain phantom. Missy Mazzoli has shown that opera is alive and well, and although it is currently only accessible to those of “high class,” Mazzoli believes that opera is a powerful medium and should be shared with everyone.

Mazzoli is the fourth annual Bragg Artist-in-Residence this November. A graduate of Yale School of Music, Mazzoli has received critical acclaim and even Grammy nominations for her unique operatic compositions. She has created music for organizations across the U.S. and internationally.. Her latest opera, The Listeners, was commissioned by the Norwegian National Opera and Opera Philadelphia and premiered  in October. Currently, she is working on an opera for the Metropolitan Opera and is one of the first two women to be commissioned by this organization. On Thursday, November 17, Mazzoli gave a talk at Mt. A titled “From MTV to the Metropolitan Opera: Operatic works.” During this lecture, Mazzoli discussed her inspiration behind pursuing opera, her creative process, and the power behind opera as a creative medium.

Mazzoli is a powerhouse in the world of operatic composing. In an industry that has been largely dominated by men, Mazzoli offers a contemporary perspective of what opera can be. “I am attracted to the stories of women in impossible situations,” she stated. She wants to “break open gender” in opera. According to Mazzoli, opera has previously used women as plot devices to further the development of male characters. Many of her operas feature female main characters who are placed in situations with no clear set of morals to guide them. An example comes from her opera Breaking the Waves where Bess McNeill is encouraged by her paraplegic husband to seek sexual activity with other men to make him feel better. Mazzoli explains that she “tr[ies] to have a deeper exploration of what [is] going on inside their minds.” She aims to create complicated female characters that have agency.

It was through telling stories about women in impossible situations that Mazzoli first fell in love with opera. In her late 20s, she came across the diaries of a Swiss woman named Isabelle Eberhardt, an explorer who dressed as a man, converted to Islam, and joined a Sufi sect. She recognized that this woman’s story deserved to be told, and in a grandiose way, which for a classical composer means opera. It took five years for this first opera to get produced; however, it is what initiated her love of opera. Before writing Songs from the Uproar: The Lives and Deaths of Isabelle Eberhardt, Mazzoli felt as if opera was an intimidating field to enter in. She played her first opera “safe” and wrote the music more as if it was a pop song which Mazzoli said “limited the scope” of what she could do. Now she has a better understanding of the capacity of opera as an art form.

“Opera is a powerful art form that collaborates with multiple disciplines,” said Mazzoli, “[it] has so many layers you can use to tell a story.” Based on the clips I have seen of Mazzoli’s operas through her presentation, I can concur. The sets of every opera are grandiose and breath-taking. Her opera Proving Up uses a long strip of stage covered in dirt as its set. The Listeners takes place outside of a Nevada suburb on the brink of the desert. The stages are transformed during these productions, and that is excluding the lighting, filmography, music, and so many other factors that help to build these worlds. Opera needs to become more commonplace because it is an immersive experience that every music lover should get to experience at least once in their lives. Creators such as Mazzoli are breathing new life into the art form, and are changing the definition of what opera can look like.