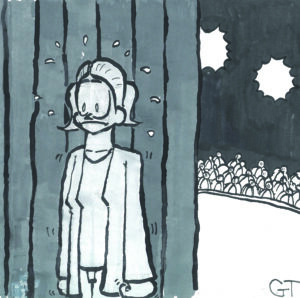 Many students at Mt. A consider themselves part of the university’s vibrant community of performing artists. I am among them. Thespians, dancers, and musicians all have a place here! There are many benefits to engaging with performing arts: supportive communities, increased physical capabilities, mental strength. Somewhere to belong.

I love performing. But less discussed are the downsides of being onstage: The mental and physical challenges associated with an art where your body is the instrument— where you are the product. Perfectionism is a deadly downside performers of all ages and disciplines have experienced.

“I actually stopped doing music for a while. I used to do things like piano lessons and guitar and violin and all these things. I stopped playing for a long time because I didn’t think I was good enough,” shares Cate McNair, first-year cognitive science major. McNair is a drama minor at Mt. A and recently performed in Motyer-Fancy Theatre’s production of The Wolves. “With theatre […] I’ll see myself getting into those cycles of, ‘I’m not doing enough, I’m not getting my lines fast enough, […]  I need to be better.’”

Many factors have led to this mindset, McNair explains. “Some of it was definitely outside influences, with teachers and directors who were harsh. Especially in music, teachers scolding you for not practicing enough, for messing up a chord, or just not quite getting it.”

“When you’re a kid you’re really impressionable, and those kinds of mindsets really stick,” they add. McNair also cites wanting to live up to her parents’ expectations as a struggle. “I was like, I need to do better, and I need to make them prouder. I need to be the best I can be and better than that, you know?”

She is not alone. Ryleigh Duquette, first-year psychology major, has an impressive history— over twelve years of education studying various forms of dance and specializing in ballet. Having studied at Canada’s National Ballet School in Toronto and the prestigious Alberta Ballet School, the discipline of ballet both helps and hampers her at times. As someone “whose brain is constantly moving at a million miles an hour,” the structure of ballet has granted Duquette a safe environment to focus without distraction.

Duquette studied Vaganova, a strict Russian technique in which examinations take over two and a half hours after year-round preparation. A ‘pass’ is the second lowest grade possible, on a scale that extends to pass plus, honours, high honours, and distinction. “No other style of dance other than ballet has distinction,” she points out. That level of exceptionalism is expected.

Today, Duquette is part of the Mt. A Dance team. Any body type is welcome here, which has not always been the case in her experience. “There was a teacher [in Toronto] who stood me behind a girl who is two years younger than me, and very, very slim, and told me that I needed to look like her, and that I was too big. She also told me my kneecaps were too fat […]. Starting right from that age, at ten years old, having an eating disorder can be very, very damaging. It has been something that I’ve struggled on and off with for the past eight years. I found ways to deal with it, but ballet tends to structure itself in a way that eating disorders are very, very common.”

Since then, Duquette has switched to a more accepting studio, has attended therapy to help her struggles, and continues to seek out welcoming communities such as the dance team at Mt. A. She refuses to let her struggles keep her from the art form she loves.

Amanda Godin, a fourth-year Bachelor of Music student, loves performing and could never picture herself working in a cubicle. She has also developed methods of coping with severe anxiety and panic attacks— combatting the terror of messing up onstage in front of countless eyes. “I feel like if I fail I’m, like, failing for my whole life, which is very dramatic. But there is always that feeling of ‘if I’m not a good enough performer […], then am I really worth anything?’”

Emotional support from the community around her has been critical for Godin. An emotional support dog now lends them needed support, and as she says, “You have to learn and realize that everyone does make mistakes.”

In my interviews, I heard too many stories to fit into one article. I am grateful for all of them. They were stories of fear, of dysmorphia, and mental struggles, but also of a deep love for being onstage. Of learning to love ourselves. In time, hopefully these common struggles might lessen and change—for now, our mutual passions will never die.