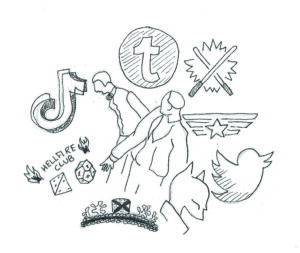 A recap of the most memorable pop culture moments this year

Pop culture is fun, entertaining, and at times infuriating. There is nothing quite like engrossing yourself in the drama of the rich and famous. This year we had many noteworthy moments. The following is a highlight reel of some of the most talked about drama, scandals, and other miscellaneous tidbits from the past year.

When Will Smith slapped Chris Rock at the 94th Academy Awards, I was at The Pond. Whatever streaming service they were using to project the award show kept cutting out and we missed the slap entirely. All that was shown was the confused reactions of celebrities, which was echoed by The Pond’s patrons as we all tried to figure out what we missed. Seconds later, in classic internet fashion, there were memes and posts littered throughout Twitter and Instagram.

In the days that followed, the confusion continued. Was it staged? A publicity stunt? A comedic bit gone wrong? Evidently, it was none of the above. Smith now faces a 10-year ban from the Oscars and other Academy events, in addition to his resignation from the Academy.

Another noteworthy celebrity feud preceded the release of Don’t Worry Darling, the psychological thriller starring Florence Pugh and Harry Styles. A lot of drama surrounded this film, but there are two moments that stand out: the supposed love triangle between Styles, Pugh, and director Olivia Wilde and Styles allegedly spitting on Chris Pine at the Venice International Film Festival.

When fans noticed Pugh was absent for almost all of the film’s press tour, many publications ran with the idea that Wilde and Pugh were feuding. This was supported by leaked videos of Wilde chiding “Miss Flo” for not wanting to work with Shia LaBeouf, who was originally cast in Styles’ role. This feud allegedly escalated when Wilde and Styles began their romance on set, many painting Pugh as the jealous “other woman.” As for the spitting incident, there is not much to say. It has since been denied by Pine, Styles, and Wilde. However, it is still pretty funny that this was considered major news.

Shifting the focus to music, this year was all about giving old hits a new life. This summer, thanks to Stranger Things, you couldn’t go anywhere without hearing Kate Bush’s “Running Up That Hill.” It was even nominated for an American Music Award this year, 36 years after the song’s original release. Other viral hits this year include Jack Harlow’s “First Class,” an interpolation of Fergie’s “Glamourous” and “Jiggle Jiggle” by Duke & Jones and Louis Theroux, which wasn’t a song until TikTok made it one. After a clip of Louis Theroux on Chicken Shop Date with Amelia Dimoldenberg went viral, Duke & Jones spiced it up with backing music and autotune. Thus, a hit was born.

Lastly, it wouldn’t be a pop culture recap without the Kardashians. They released their new reality show in partnership with Hulu, Kim Kardashian wore Marilyn Monroe’s dress to the Met Gala, Kendall Jenner struggled to cut a cucumber, and Kylie Jenner briefly named her son “Wolf.” Kim Kardashian also started dating Pete Davidson, dividing the world once again on the topic of Davidson’s desirability.

These are just some of the many moments that have polluted our screens this year. Undoubtedly, there will be much more entertainment to come in 2023. Here’s to another year of rich people drama and TikTok soundbites.