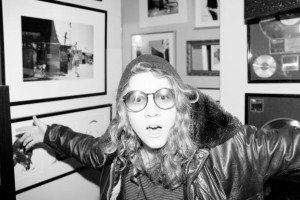 Simone Schmidt’s solo project Fiver is headlining the final day of this year’s Stereophonic Music Festival. The Argosy caught up with the Toronto-based artist and talked about her solo project, her newest album, and Sackville.

Argosy: What prompted your solo project? Has it come with any unexpected advantages or disadvantages?

Simone Schmidt: I’d worked collectively over the years, first in One Hundred Dollars, and now in The Highest Order, which meant that I’d been offering up lyrics and songs to a group of people to interpret collaboratively.  I’ve learned a lot throughout the process about engineering, producing, about collaboration, about other people’s sensibilities and also my own. After One Hundred Dollars (OHD) stopped working, I had a big back log of songs, some of which I’d kept from the group because I couldn’t imagine that unit playing them as I wanted to hear them, some because the group never could really get a good feel for them.  I was encouraged by this engineer and pedal steel player, Stew Crookes, who had produced OHD’s second LP, Songs of Man, and I started to feel competent and confident enough in my opinions and skill to take complete control over a record. I wanted to make room to experiment on my own, to make musical decisions that Paul or Kyle or Simone TB might not like. Though I did work with Stew and Paul Mortimer in arranging and producing the songs, I retained a power over the project which I happily forfeit in a project like The Highest Order where we do things collaboratively. Both approaches have their freedoms and their limitations, and I’m happy to have both outlets. If I didn’t have Fiver, I’d be less inclined to be generous in my collaborative approach in other projects.

Two great things about having a solo project are the economics of it, and the new life that a changing lineup can bring to a song. It’s a dismal time in the economy for almost everybody on the Earth, given global austerity and economic downturn, and people just aren’t paying for music.  Moreover there are thousands of kids in North America with post-secondary degrees, large debts, without career prospects or any trade skills, and they’re all milling around, biding their time, extending their adolescences, being in bands, so there’s this glut of bands out there that are willing to play a show for basically nothing. Every young band that comes up and is willing to play for a case of beer and no money pushes down the guarantees for the rest of us. I’ve watched the fee for a band plummet over the past six years, which offers promoters no incentive to advertise your shows, so it’s just not economically viable for me to be touring all the time with three other people who are losing money and missing out on making money at home. With Fiver I have the flexibility of switching the lineup, or playing solo. The marker of a good folk song is that it can be heard pared down to just guitar and voice and remain powerful, and so I’m interested in exploring the songs and the show as a solo performer. It’s a whole other thing. I also love the prospect of working with other musicians. When I saw Yellowteeth for the first time I instantly wanted to play with the musicians in that band, and I’m happy I get the chance to over the next few weeks.

A: What was the writing process like for this new album? Were any songs particularly hard to write or otherwise significant? How did you know these were going to be Fiver songs, instead of One Hundred Dollars or Highest Order songs?

SS: I write all the time, constantly, and I don’t write songs towards albums. Sometimes songs fit together, and I want to hear them recorded with a certain instrumentation, and the timing’s right, and it becomes a record. My songs are character- based—either they contain a full narrative that’s spoken by the person involved, or they catch a character mid act and describe a feeling. The title of Lost the Plot is a reference to a few things, including the absence of the former, in contrast to my songs in One Hundred Dollars, in which full stories were often told.

With this Fiver record, the songs had to do with sickness, cancer in particular, occupational hazards, insanity, violence, depression, the role of women in a sick society, the connectedness between the land and our own bodies. I wanted to sing them all with a particular delivery, a kind of vocal technique that might draw them together, and in so doing, reveal the intersections of certain feelings and experiences, cause and effect.

I’d say the key to the record is “Rage of Plastics,” which I wrote over nine months and whittled away at and still came out just under eight minutes. I wanted to tell the story of a woman who works at the refinery that’s caused her husband’s cancer, but I didn’t want to be straight, I wanted the poetry to carry it, I didn’t want to say the word cancer, I wanted a snapshot of that elephant, of self-medication, addiction, complicity, and the conflict we feel in an industrialized age wherein our very ways of making a living kill us. It’s pretty dense, and references my own lived experience of nursing a partner through cancer as well as Rachel Carson’s book Silent Spring. It’s right in the middle of the record and the rest of the songs ripple outwards.

A:  You seem to make be in town quite often. Is there anything that makes Sackville a favourable place to play, or is it just on the way to Halifax?

SS: Sackville’s my favourite aunt, and Halifax is her accessory—an Atlantic purse. SappyFest was the first festival I played back when One Hundred Dollars was a duo. Sappy II, I think. I found it to be a really exciting festival because it married better known acts with lesser known acts, and seemed to do away with the hierarchies that exist at other festivals. I met a lot of people who were very different than me, but really nice, like Ilse Kramer and Paul Henderson. Those people became my friends, and I’ve been lucky to be a repeat performer at the festival, and get to have more friendships in the town, and be supported by CHMA. But what really did it was that in 2011 I did a residency at Struts, and John Murchie was really kind to me, and so I keep coming here for burgers and peace, a break from Toronto, good conversation.

A: You played SappyFest earlier this year with the Highest Order. What was your best memory of that experience?

SS: Playing. Playing music is always the best part of any experience wherein I get to play music.

A:  How did you find being part of the secret show on the last night, especially considering the precedent that the Arcade Fire set? Is there any story behind the name Jackson Triggs and the Wine Lips?

SS: Fun. I didn’t think about the Arcade Fire. Jackson Triggs is Paul Mortimer’s [guitarist and vocalist in The Highest Order] new country alter ego. You can expect a record within the year.

A: What is next for the project after the tour? Are there any possibilities of further collaboration with the musicians of Sackville?

SS: I’ll just keep writing and playing music and tour. I hope to collaborate with Cris Derksen, who’s a great cellist who lives in the West Coast but is moving to Toronto, and to make another record. If I could teleport Josée [Caron], Nic [Wilson], and Kevin [Brasier] to Toronto I’d keep jamming with them (I’m free Wednesday nights, guys).

A: How’re you feeling about being one of the headliners of Stereophonic? Have you headlined any other small festivals?