The resurgence of the 2014 Tumblr aesthetic 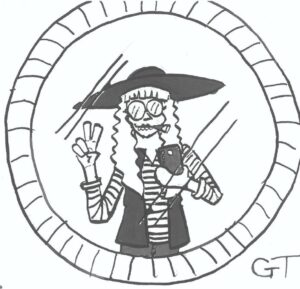 Trends are cyclical. From leg warmers to low-rise jeans, we’ve seen everything make a comeback. In 2014, Tumblr took over the internet as more than just a social networking site. It became a full-fledged aesthetic, including fashion, music, and angsty attitudes. Fishnet stockings, jean jackets, American Apparel tennis skirts and Doc Martens— a style reminiscent of 90s grunge. iPods filled with The 1975’s self-titled album The 1975, Arctic Monkeys’ AM, Lana Del Rey’s Born to Die and Lorde’s Pure Heroine, to name a few. And we can’t forget the generally sad disposition harbingers of this aesthetic were constantly sporting.

I too took cringy high angle selfies to post on my blog feed, along with angsty quotes and song lyrics that would likely make my parents concerned for my mental state. Now, eight years later, I’m just as moody. I just don’t post about it for all the internet to see. We collectively romanticized the Effy Stonem level sadness and were inundated with images that perpetuated skinny white girls as the ideal beauty standard. As the music and fashion make a comeback, will the problematic elements of this time follow suit?

On October 14, The 1975 released “About You” from their fifth studio album Being Funny In a Foreign Language, prompting many fans to comment on its nostalgic sound. “About You” feels straight out of their first studio album, The 1975. This makes sense, as the band’s lead singer Matty Healy describes it as a continuation of “Robbers,” a fan favourite off their first album. The songs are stylistically very similar, with whispered vocals and lyrics about a former lover. The addition of strings, courtesy of Warren Ellis, and the vocals of Carly Holt, create a haunting sound that differentiates it from “Robbers” while preserving its essence.

The 1975 aren’t the only 2014 Tumblr favorites to release music in 2022. Arctic Monkeys have returned with The Car, everyone’s favourite sad girl Lana Del Rey was recently featured on Taylor Swift’s “Snow on the Beach” and Paramore is scheduled to return in 2023 with This Is Why. Even some of the 2014 staples like The Neighborhood’s “Sweater Weather” and Lana Del Rey’s “Summertime Sadness” have returned as trending TikTok sounds.

As for fashion, over the last few years, a few staple garments have made their way back. Tennis skirts, black platform boots, silver jewelry, and more recently, plaids and fishnet tights. In many ways, grunge never really died; bits and pieces can be found throughout the ever-changing trend cycle.

However, it would be amiss not to mention that the fashion went hand in hand with skinniness. Tumblr was well-known for spreading “thinspo” and romanticizing eating disorders. TikTok carries on this legacy, as has Instagram, YouTube, and other social media platforms.

I am all for bringing back the music and some but definitely not all of the fashion trends (you will never see me wearing a tattoo choker again). Yet we must remember that Tumblr wasn’t always the healthiest place for young people and strive not to recreate the toxicity. Keep this in mind if you choose to re-enter your fluorescent adolescence.